Update Required To play the media you will need to either update your browser to a recent version or update your Flash plugin.
By Bruce Alpert
15 June, 2016


Time is running out for President Barack Obama to meet his goal of placing 10,000 Syrian refugees in the United States.

The process has been slowed by concerns about terrorism, especially after the mass shooting in Orlando, Florida.

One of the first Syrian refugees resettled to the U.S. spoke about his sorrow for the killing of 49 people on Sunday. 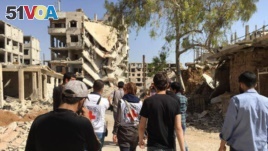 This photo released by the International Committee for the Red Cross shows the first humanitarian aid convoy in Daraya, Syria on Wednesday, June 1, 2016. It was the first aid to reach Daraya in four years. The U.N. estimates that 4,000 to 8,000 people currently live there. (ICRC via AP)

"This is not Islam," said an interpreter speaking for 45-year-old Ahmad Alabood. "And he feels for the families that lost loved ones or have injured people." The Associated Press reported his comments.

The Obama administration has said it wants to admit 10,000 Syrian refugees by October 1. That is the end of the fiscal year, the 12-month period the government uses for keeping records.

But it will be difficult for the administration to reach that target. The AP reports that 5,763 Syrian refugees have been admitted to the U.S. since 2011.

An issue in the presidential campaign

Former Secretary of State Hillary Clinton supports calls to admit up to 65,000 refugees. Clinton is the likely presidential nominee of the Democratic Party. She is expected to face businessman Donald Trump, the likely Republican candidate, in the November 8 elections.

In a speech on Monday, Donald Trump said he would suspend immigration from areas with a history of terrorism.

Trump said Clinton, as head of the State Department, was responsible for admissions and the admissions process for foreigners seeking to live in the U.S. He has said he wants to temporarily stop Muslims from entering the country. He said that step is needed to protect against terrorism. Trump later amended his proposal, saying he would suspend immigration from areas where there is a proven history of terrorism against the U.S. and its allies.

Clinton criticized Trump's call for a ban on Muslims from entering the country. She said his policy would not have stopped the killings in Orlando.

She noted that Omar Mateen, the man who police say carried out the attack, was born in New York.

No agreement in Congress

Some Republicans in Congress say President Obama is trying to bring in too many Syrian immigrants.

But 27 Democratic members of the Senate recently wrote to Obama, saying the process is not going fast enough.

In their letter, the senators said Canada has already admitted more than 26,000 Syrian refugees. They said special checks by the State Department keep out people who are thought to be terrorist threats.

The lawmakers used wording from a United Nations report. It said that fewer safe places in Syria mean everyday decisions, like whether to go out to buy bread, can become a matter of life-or-death.

"The war has led to hundreds of thousands of fatalities, more than a million injured, and more than half of Syria's entire population being displaced," the letter said.

The civil war in Syria started five years ago. Since then, the fighting has displaced more than six million Syrians. More than four million others have fled the country.

Some of the refugees are now in the United States. The highest number of refugees has settled in Michigan, with more than 500 arrivals, reports The Detroit News.

People from Syria must go through what is called an "enhanced review." Law enforcement and intelligence reports are checked for every applicant, according to the State Department.

But some Republicans said it is hard to get a good sense of who is and who is not a threat because Syria has been at war for so long.

"Islamic radicals want to attack America," said Congresswoman Marsha Blackburn, a member of the Republican Party. "It's no secret to the American people."

Erol Kekic of Church World Service said some landlords refuse to rent homes to people from Syria because of terrorism concerns.

"On one side, it is the unfortunate statements by politicians about the supposed dangers of Syrian immigrants," Kekic said.

But the application process and investigations for security and health risks add to the delays. Kekic said a minor mistake can delay the process for months.

He worries about the delays. He said they affect the physical and mental health of people who faced "major trauma" because of Syria's civil war.

Nina Zelic works for the Lutheran Immigration and Refugee Service. She says if there is good news, it is that the "faith community" and others are "stepping up" to the Syrian refugee crisis.

"Given all the negative comments by some politicians, it is good to see that outpouring of community support," Zelic said.

Many Syrian refugees are skilled and had jobs before they fled the country. Erol Kekic said that was before the civil war cost them everything -- their homes, their jobs and their sense of well-being.

Some refugees, mainly those from rural areas, have large families. That makes it hard to find homes big enough to house them together, according to several U.S. groups.

landlord – n. a person who owns a house, apartment, etc., and rents it to other people

rent – v. to allow someone to stay in your house, apartment, in return for money

application – n. a formal and usually written request for something

unfortunate – adj. not appropriate or desirable

fatality – n. a death that results from a disaster, accident or war

enhanced – adj. to increase or improve

radical – n. having extreme political or social views that are not shared by most people