Update Required To play the media you will need to either update your browser to a recent version or update your Flash plugin.
By Ashley Thompson
25 October, 2017

In 1922, German-born scientist Albert Einstein was traveling to Tokyo when he found out he had earned the Nobel Prize in Physics.

While in Japan, Einstein stayed at Tokyo's Imperial Hotel. During his stay, a hotel worker came to Einstein's room to make a delivery. Einstein found himself without any money to give the man as a tip for his services.

So, instead of money, the famous scientist handed the hotel worker a signed note with a sentence he wrote in German. It read: "A calm and humble life will bring more happiness than the pursuit of success and the constant restlessness that comes with it."

He gave him another note that read: "Where there's a will, there's a way."

Both notes were written on the Imperial Hotel's notepaper. 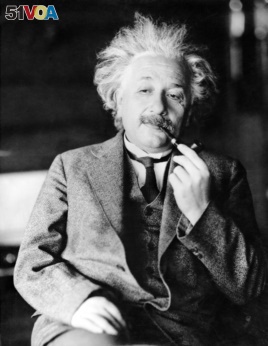 Einstein reportedly advised the man to keep the notes, saying they may one day be worth more than any tip he could give him.

The hotel worker must have listened to Einstein's advice.

On Tuesday, the notes were put on auction in Jerusalem. The price for the happiness note started at $2,000. About 25 minutes later, it sold to the highest bidder.

That person, who was not named, agreed to pay $1.3 million dollars.

Einstein may be best known for his theory of relativity. In fact, the winners of this year's Nobel Prize for Physics earned the award for measuring gravitational waves -- an important part of Einstein's theory.

But now, his one-sentence theory of happiness is famous, as well.

Reuters reported this story. Ashley Thompson adapted it, with additional reporting from the Associated Press. Hai Do was the editor.

tip - n. an extra amount of money given to someone who performs a service for you

advice - n. an opinion or suggestion about what someone should do

auction - n. a public sale at which things are sold to the people who offer to pay the most

bid - v. to offer to pay (a particular amount of money) for something that is being sold : to make a bid at an auction