Can You Correct 'Her and I?'

Update Required To play the media you will need to either update your browser to a recent version or update your Flash plugin.
By Dr. Jill Robbins
13 March, 2015

"Recently, at an IRL party — that is, a party that takes place ‘in real life,' as opposed to where I generally live, which is on the Internet — a guest asked a friend and I how we met."

The sentence includes a common error I have been seeing and hearing more and more often lately.

Even President Obama can be heard using "I" for the object of a sentence. At his first press conference, on November 7, 2008, he spoke about being invited to tour the White House. "Well, President Bush graciously invited Michelle and I to -- to meet with him and First Lady Laura Bush."

The rule for object pronouns

English has eight subject pronouns: I, you, he, she, it, we, you and they. Subject pronouns show the actor in a sentence. For example, in the sentence "I speak English," "I" is the actor. 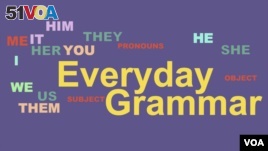 Take the sentence "President Obama gave an award to my brother and me." We can easily see the need for an object pronoun because of the preposition "to."

But some sentences do not have prepositions, as in "Obama asked my brother and me some questions." The sentence still needs the object pronoun "me."

However, some people might want to say "Obama asked my brother and I some questions." You know that sentence has a grammar error because "I" is not an object pronoun.

Why people say "I" instead of "me"

I think the confusion about "I" and "me" comes from instruction we get as children: to be polite. When we mention ourselves and another person in a sentence, we are told to put the other person first.

So, English speakers who are faced with two people in the object position in a sentence often grab for the phrase "somebody and I." They do not notice the phrase is grammatically incorrect. It just sounds more polite.

Writers Patricia T. O'Conner and Stewart Kellerman guess that people correct children who use "me" instead of "I" so much, the children grow up using "I" even when it is wrong. They explain the term for this linguistic phenomenon is "hypercorrection."

Back to Ms. Hughes, her party and the New York Times blog. Her sentence should be re-written as "...a guest asked a friend and me how we met." Shortly after I called the error to the newspaper's attention, the sentence was corrected.

Now you will always know the right pronoun to use – take it from me!

error - n. something that is not correct; a wrong action or statement; mistake

instruction - n. the action or process of teaching : the act of instructing someone

phenomenon - n. something (such as an interesting fact or event) that can be observed and studied and that typically is unusual or difficult to understand or explain fully

hypercorrection – n. the mistaken use of a word form or pronunciation based on a false analogy with a correct or prestigious form?

Now it's your turn. In the comments section, tell us about your own grammar gripes. What do people say in your language that bothers you?