Do You Know Which Way the Wind Blows?

Update Required To play the media you will need to either update your browser to a recent version or update your Flash plugin.
By Anna Matteo
24 February, 2018


Now, the VOA Learning English program Words and Their Stories, our weekly show about common expressions in American English.

Wind is a powerful force in nature. Wind energy is partly responsible for great waves in the world's oceans. Winds can help create powerful storms, such as tornadoes and hurricanes.

From very light winds, or breezes, to strong gales, wind is a force you can't see but can surely feel. Its power can be captured to create electricity for cities and the countryside.

Wind can also power many expressions in American English.

Let's start with a simple one.

If you run like the wind, you are a very fast runner.

After running, sometimes you can feel energized. The runner gets what we call a second wind. We use this expression when we were tired, but then get more energy to finish something. For example, sometimes I feel tired after work. But after a short rest and a cup of tea, I get my second wind. I'm ready to do something fun with my friends and family.

Now, people who throw caution to the wind take a chance. This means they become careless or carefree, depending on the situation. People forget what they should be doing and just do what they want to instead.

Now, if you are doing something difficult, it is good to have the wind at your back. This way it is easier to go forward. It's always more difficult to do something in a strong wind -- unless you are sailing. 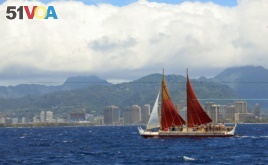 The Hokulea sailing canoe is seen off Honolulu, April 29, 2014. The Polynesian voyaging canoe is returning to Hawaii after a three-year journey around the world guided only by nature with navigators using no modern navigation to guide them. (File Photo)

Knowing the direction of the wind is the most important part of sailing. When wind fills a sail, it makes the boat go faster. When you or I have wind in our "sails," we have the energy and power to do what we what.

If you take the wind out of someone's sails, you keep them from reaching their objectives. You create a barrier or block them in some way. In life, it's a good idea to surround yourself with people who want to fill your sails with wind and not take it out.

Wind and sailing give us another expression.

If you are three sheets to the wind, you have had way too much alcohol to drink. You are so drunk that you have a hard time standing up.

Several websites explain that in this expression "sheets" are the ropes used to control the sails on a boat or ship. If these ropes are left blowing in the wind, the crew might lose control – sort of like a drunk person.

Many songwriters use the image of wind in their songs. If something such as an idea is blowing in the wind, it is being discussed but has yet to be decided.

You might have heard Bob Dylan's song "Blowin' in the Wind."

How many deaths will it take 'til (until) he knows
That too many people have died?

Does Dylan mean the answer is undecided? Or does he mean that the answers to the problems he sings about will spread across the world like seeds carried away by the wind? When asked in an interview, he didn't give a clear answer. He simply said the answer is "blowin' in the wind."

Dylan uses another "wind" expression in the song "Subterranean Homesick Blues." But the meaning is clear when he sings "you don't need a weatherman to know which way the wind blows."

Here, he means that you don't need someone knowledgeable or in power to confirm something for you. Just trust yourself. You can figure it out on your own.

So, when you know which way the wind blows, you know what is going on.

Now, some things are hard to do when there is no wind. Sailing a boat and flying a kite are two good examples. But other things are really hard to do in the wind, such as lighting a candle.

That brings us to our last expression for today.

A candle in the wind describes something that is weak, unprotected and likely to fail or possibly even die.

In the early 1970s, Elton John and Bernie Taupin wrote the song "Candle in the Wind" in honor of actress Marilyn Monroe, who died at the age of 36.

In 1997, Elton John performed a version of the song, with different wording, at the funeral of Diana, Princess of Wales.

She died in a car crash in Paris while trying to escape photographers. Like Marilyn Monroe, Princess Diana was only 36 years old.

If you have similar expression using "wind" in your language, let us know in the Comments Section. Or simply practice using one or more of the expressions you heard here.

And I would have liked to have known you
But I was just a kid
Your candle burned out long before
Your legend ever did.

And I would have liked to have known you
But I was just a kid
Your candle burned out long before
Your legend ever did.

carefree – adj. having no worries or troubles

candle – n. a usually molded or dipped mass of wax or tallow containing a wick that may be burned