Explainer: Can Anyone Force British Prime Minister May to Resign?

Update Required To play the media you will need to either update your browser to a recent version or update your Flash plugin.
By Susan Shand
22 May, 2019


British Prime Minister Theresa May is facing widespread pressure to give up power, but can her lawmakers force her from office?

May has already promised she will resign and let someone else negotiate Britain's future relationship with the European Union (EU). She has agreed to set out details for the end of her leadership. But she first wants another vote in parliament on her plan for separating from the EU. That vote would be held in early June.

Some lawmakers have strongly criticized May for attempting to relaunch her EU exit deal, an effort known as Brexit. They are unhappy with measures aimed at winning over opponents and members of her own Conservative Party.

Some Conservative lawmakers now say May should resign immediately. Can her party force her out before she wants to go?

Conservative Members of parliament cannot use the party's normal process for removing the prime minister until December 2019. In December 2018, lawmakers tried and failed to remove May, and the rules say they must wait 12 months to try again. 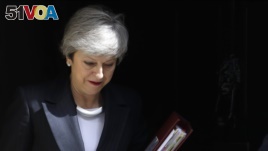 It is possible for the committee that represents Conservative lawmakers to change the rules of the process, but they have so far chosen not to do so.

Parliament can vote on whether it is supportive of May's government. If a majority of lawmakers decide they do not, she could be forced to resign.

After losing a vote of confidence, there are 14 days in which she could try to hold onto power by winning another confidence vote. During this time, the opposition Labour Party can also try to form its own government.

A general election is called if no government with majority support in parliament can be formed after 14 days.

In January, the government survived a vote of confidence called by Labour leader Jeremy Corbyn. But there are no rules preventing Labour from calling another vote at any time.

To succeed, a handful of Conservative lawmakers or members of the small allied Democratic Unionist Party would need to either abstain or vote with the opposition to oust the government.

Some pro-Brexit lawmakers have suggested they might be ready to take this step. But it is unclear if this would happen in the event of a vote being called.

Losing a vote of confidence would not automatically force May to resign as head of the Conservatives, but politically it is unlikely she would be able to continue.

Without an official method to remove May that does not risk a general election, Conservatives are looking at other ways to put pressure on her.

May once said that Brexit would not be delayed beyond June 30. Yet she recently agreed with EU officials that Britain could remain a member until the end of October.

These words have been used to make the case that she should resign. So have recent heavy losses by Conservative candidates in recent local elections. Political observers say the Conservatives are likely to suffer more losses in European parliamentary elections this week.

abstain – v. to choose not to do or have something

automatically – adv. having controls that allow something to work or happen without being directly controlled by a person

beyond – adv. on or to the farther part or side