Expressions for Getting Things Done

Update Required To play the media you will need to either update your browser to a recent version or update your Flash plugin.
By Anna Matteo
07 August 2021

On this program, we explore words and expressions in the English language.

Our goal is to teach you American English by any means possible – in other words, by hook or by crook. 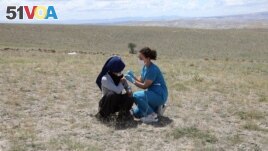 A health worker traveled hundreds of kilometers on July 8, 2021 to get things done. She gave COVID-19 shots to farmworkers in the village of Oguzlar in Turkey. (Photo by Adem ALTAN / AFP)

"By hook or by crook" is a very old expression that is still used today. It means to try to reach a goal by any method or any means possible.

For example, a friend of mine really wanted to get a job at this marketing company. He said he would do anything to get it. His exact words were: "I am going to get that job by hook or by crook." He is the most hardworking and determined person I know. So, one way or another he will definitely get that job.

Today, "one way or another" is a more common way to say the same thing as "by hook or by crook."

Strictly speaking, double negatives are not correct grammar. But we still use them to intensify a statement. For example, you might hear, "There is no way he is NOT getting that job." Which means...he is definitely getting that job.

Now, let's get back to "By hook or by crook." It is believed to have appeared in Britain in the late 1300s. No one is sure where exactly it comes from. But some word experts say the expression is about a problem faced by common people who would take wood from the forests of the king.

The law said they could only take as much as their tools would allow. And those tools were called a shepherd's crook, a long, rounded stick, and a billhook, a cutting tool. So, if you could collect the wood with your hook and crook, it was yours.

Here is another similar expression: come hell or high water.

This means that you will get something done no matter how difficult or no matter what happens. No difficulties or obstacles will stop you.

For example, let's say my best friend just moved to Washington, D.C. She has a great job but is having trouble finding a new apartment. I know the city well. So, I make it my mission to help her. Come hell or high water I will find her an apartment. No matter the difficulties, I will do everything in my power to try to make this happen.

Experts say this expression comes from overcoming destructive forces of fires or floods. Some say its first recorded use in the United States was in 1915. But others say it is older.

If you do something "come hell or high water," you are determined to do it. You will do it despite the difficulties involved.

We here at VOA Learning know that our listeners want to learn English very badly. By hook or by crook and come hell or high water...you will!

And that's all the time we have for this Words and Their Stories. Until next time...I'm Anna Matteo.

determined –adj. having a strong feeling that you are going to do something

definitely –adv. without doubt; in a way that is clear

obstacle –n. a barrier; something that makes it difficult to do something

mission –n. a task or job that someone has given you

despite –preposition without being prevented

overcome –v. to successfully deal with; to defeat; to be strongly or severely affected by something