Update Required To play the media you will need to either update your browser to a recent version or update your Flash plugin.
By Bruce Alpert
01 August, 2017


Fallout continues from angry protests in which students aimed to stop conservative speeches at their colleges.

Two colleges have announced punishments for students who tried to block such speeches. They also promised to invite more speakers with different opinions to speak at their schools.

Some U.S. lawmakers took notice of speeches being stopped on college campuses. Senator Chuck Grassley is the Republican chairman of the Senate Judiciary Committee. He said that colleges need to do more to punish those involved.

"Many students erroneously think that speech that they consider hateful is violent. Yet some students engage in acts of violence against speech, and universities have failed to prevent or adequately punish that violence." 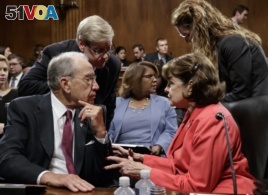 Punishment for some demonstrators

At Claremont McKenna College in California, seven students were punished for an incident that took place in April. The school said the students were part of a group that blocked the entry of a room where Heather Mac Donald of the conservative Manhattan Institute was giving a speech.

Three of the students will not be permitted to return to school for one year.

The school said the blockade violated two of the school's important values -- "freedom of speech and assembly."

The protesting students at Claremont McKenna said Mac Donald's opinions are racist and should not be protected.

However, the school said in a statement that, "Our community must protect the right to learn from others, especially those with whom we strongly disagree."

At Middlebury College in Vermont, students tried to block a speech by Charles Murray. He co-wrote a 1990s book about intelligence that some critics consider racist.

As Murray tried to speak, students turned their backs to him and tried to shout him down.

Later, as Murray and a professor left the school, students and other protesters tried to block their way. The professor was injured.

Middlebury officials announced 64 students would be punished. But unlike at Claremont McKenna, none were stopped from attending classes for all or part of the next school year.

Floyd Abrams is a media attorney. He recently spoke about how the political divide between Democrats and Republicans and conservatives and liberals has spread to colleges.

"Too many people are unwilling to listen to ideas with which they disagree and that is a problem which has only a long-term solution, but is one I suggest to you that we should really start to address now."

At a hearing of the House Oversight Committee on July 27th, Fredrick Lawrence of the Anti-Defamation League agreed that even hate speech "is generally protected."

But he said school officials also have a moral responsibility to speak out against hate speech.

Lawrence said colleges should be ready to "address the harm" that can result from hateful speech, even if they cannot stop it under America's guarantee of free speech.

In 2015, the University of Missouri went through two months of protests over racism. The protests led to the resignation of top school officials.

The University of Missouri protests also became known for an incident in which a communications instructor was heard asking for help in stopping a student reporter from filming protesting students. The instructor was later dismissed for trying to stop a reporter from covering a story at a public university.

Christian Basi is a spokesman for the University of Missouri. He said enrollment for the upcoming fall semester is likely to be down for the second straight year. But he also said Missouri has just completed a strong fundraising effort and continues to receive large numbers of international students.

At the University of California, Berkeley, protests led to cancellations of two speeches by well-known conservative activists -- Milo Yiannopoulos and Ann Coulter.

The group, By Any Means Necessary, defended its efforts to stop the speeches. It said, "Hate speech is not free speech."

Naweed Thamas is vice president of Berkeley College Republicans. He said it is not easy being conservative or Republican at Berkeley.

He told VOA that he has received death threats, been chased and hit, and had his face put on flyers with his personal information. 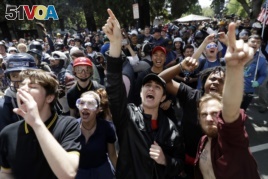 A recent free speech rally at the University of California, Berkeley.

College professor says he was threatened

Evergreen College in the western state of Washington recently had a board meeting to discuss what should happen following racial conflicts this spring.

A professor said he was threatened after he refused to participate on a day in which white students and employees were asked to stay away from the college. Organizers said the day was meant to help people better understand racism.

One professor said concerns about racism led to the protests and suggested protesters not be punished.

But one white student said things have gone too far. She said when she attempted to speak at a student meeting, she was told only black students were permitted to speak.

What about new students?

While the University of Missouri has seen a decrease in new students following the 2015 protests, other schools where protests have taken place continue to be popular with students.

The University of California - Berkeley and Yale University have reported increased enrollment. Yale had protests in 2015 after two university officials said it would be okay for students to wear costumes -- even if they offended some other students.

Bruce Alpert reported this story for VOA Learning English, based on reports by the Associated Press and other sources. Ashley Thompson was the editor.

We want to hear from you. Write to us in the Comments Section and share your views on 51VOA.COM. How important do you consider free speech? Is there some speech you believe should not be allowed at colleges and universities?

adequately - adv. enough for some need or requirement

blockade - v. to block people from entering a place

assembly - n. to meet in a place with others

address - v. deal with a problem

flyer - n. a piece of paper that has something printed on it

white supremacist - n. a person who believes whites are better than all other races, especially the black race

enrollment - n. number of people attending a school or institution

semester - n. one of two usually 18-week periods that make up an academic year at a school or college

fundraising - n. raising money for a cause or a group, such as a college