Update Required To play the media you will need to either update your browser to a recent version or update your Flash plugin.
By John Russell
11 June 2021


This week on Ask a Teacher, we answer a question from Thuy Duong Le, who writes:

What is the difference between finally, eventually and ultimately? 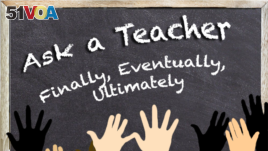 Thank you for your question. It centers on three words that act as adverbs. Adverbs can change the meaning of a verb, adjective, another adverb, or even a whole sentence.

Finally, eventually, and ultimately generally show time. They often suggest the idea of a later time or the end of a period of time. In some cases, they are very close in meaning.

But there are some differences in the ways that English speakers use these terms. Let's explore a few of them.

Finally is often used to introduce the last in a series of statements. When used in this way, finally is especially common in speeches, presentations, or in formal writing such as in an academic paper or a job application.

For example, a person might end a presentation by saying:

Finally, I'd like to thank the conference organizers for putting together this event.

Eventually means at some later time or in the end. It can be used to talk about something that will happen in the future. For example, you might hear a basketball fan say:

The Celtics have some good young players. In a few years, they'll eventually win the championship.

Or, you might hear a gardener talk about a tree that will grow to a tall height, as in:

This tree will eventually reach a height of 50 meters.

Ultimately can mean: in the most important way or at the most basic level.

When it has this meaning, speakers often use it at the beginning or in the middle of a sentence, as in:

Ultimately, it is a question for the voters to decide.

It is ultimately a question for the voters to decide.

The next time you read in English or listen to English speakers, try to pay careful attention to words such as finally, eventually, and ultimately. Over time, you will notice regular ways that speakers use these terms.

With hard work and careful study, you will eventually understand how to use these terms with ease.

If you have a question for our staff of teachers, send it by email to learningenglish@voanews.com.

championship – n. the title of champion in a sport or game

academic –adj. of or relating to schools and education

application –n. a formal request to be considered for a job, to be admitted to a school or a similar request