Update Required To play the media you will need to either update your browser to a recent version or update your Flash plugin.
By Phil Dierking
17 February, 2017


Flight attendant Sheila Fedrick says she knew something was wrong when she saw a teenage girl with greasy hair sitting on an airplane next to an older man.

The girl had bruises, possible evidence that she had been hurt. The man, however, appeared very well-dressed.

When Fedrick tried to talk to them, the man became defensive. So the flight attendant left a note for the girl in a bathroom. The girl later wrote back a message that said "I need help."

Fedrick was able to inform the pilot of the Alaska Airlines flight from Seattle to San Francisco. The pilot spoke to police officials on the ground. By the time the plane landed, officers were waiting for the girl and the man at the airport. She later learned the girl was a victim of human trafficking. 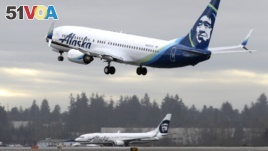 The U.S. Federal Bureau of Investigation says human trafficking is thought to be the third largest criminal activity in the world. Trafficking involves the illegal transport of people from one country or area to another. This is usually done to force victims into forced labor or the sex trade.

Human traffickers have often used airplanes as a way to quietly transport their victims. Yet one group, Airline Ambassadors International, or AAI, is training airline and airport workers to recognize signs of human trafficking. The goal is to give more workers the same kind of skills and sensitivity Fedrick has.

Rivard said AAI developed the first industry-specific training on human trafficking and trafficking awareness. She said that training just one person can have a big effect.

Rivard said it has not always been easy to persuade airline companies to collaborate with her group.

"All airlines are required to train both pilots and flight attendants annually. And including us in the security section of training would seem simple enough to do. But the airlines were not that receptive, originally."

Rivard told VOA that AAI can spend about $3,000 to set up one training program -- or $5,000, if it's international. The group contacts airport directors for a place to hold the classes, but AAI usually has to raise the money for the training itself.

There are many signs to look for.

"We teach our crews ... to be aware of victims and be aware of who is traveling and who they are traveling with... Are they with or under the control of a companion... and to look for different indicators like they are not in control of their travel documents. They are frightened, ashamed, or nervous. In many cases, two or three cases I know of where the victim was not even allowed to use the bathroom on their own. They may be unsure of their destination. They may have bruises... If they have scripted or inconsistent stories ... Many of them appear drugged and they probably are."

Rivard also said sometimes victims are tattooed -- with a bar code or name like "daddy" printed on their skin.

Rivard says it is important not to try and rescue the victim when you first recognize the problem. This can endanger yourself and the victim. The most important action is to report what you see to police, with as many details as you can.

Sridhar Chillara is a volunteer with AAI. He used his trafficking awareness training while on a flight from Santo Domingo, Dominican Republic to Newark, New Jersey. He noticed two children that were being mistreated by two older people. He also saw that as they moved through the airport, they were passed to other individuals, both on and off the plane.

Chillara informed the flight attendants, who contacted the airport in Newark. He was later told that his report led U.S. officials to uncover a child pornography ring in Boston. Eighty-six children were saved.

Rivard says that if you see a situation suspected of human trafficking, there are several ways to report it.

AAI has developed a free computer app that lets users not only report what they saw, but they can upload photographs, audio, video, and GPS location.

Phil Dierking reported on this story for VOA Learning English. George Grow was the editor.

What are other ways people can stop human trafficking? We want to hear from you. Write to us in the Comments Section or on 51VOA.COM.

dress – v. to put clothes on yourself

tattoo – n. a picture, word, etc., that is drawn on a person's skin by using a needle and ink

GPS location – n. The technology can pinpoint longitude, latitude, ground speed, and course direction of the target somewhere in the world

awareness – n. knowledge and awareness of your own personality, character, or surroundings