Update Required To play the media you will need to either update your browser to a recent version or update your Flash plugin.
By Bryan Lynn
11 February 2021


A French religious worker who survived COVID-19 celebrated her 117th birthday on Thursday.

Sister Andre is a nun who lives in a retirement home in the southern city of Toulon. She also is believed to be the world's second-oldest person.

A spokesman for the retirement home, David Tavella, said Sister Andre tested positive for COVID-19 in the middle of January. She was separated from others at the home, but experienced few signs of the disease. Her survival story made news across the world. 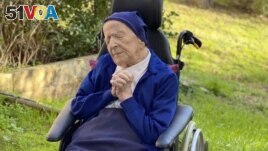 Sister Andre, whose birth name is Lucile Randon, was to take part in a celebration with a small number of people at the home. Tavella said plans called for a big meal and a special religious observance in her honor.

Some of Sister Andre's family members were also expected to join a video call with her. "It's a big day," Tavella said. "She is in great shape. I went to see her this morning. She is really happy. She wanted me to tell her the (plan) for the day again," he added.

The meal was to include some of Sister Andre's food favorites, including a special chicken dish and Baked Alaska for dessert. "All of it washed down with red wine, because she drinks red wine," Tavella said. "It's one of her secrets of longevity."

As for loading up the cake with candles, Tavella said they had stopped trying that a long time ago. "Because even if we made big cakes, I'm not sure that she would have enough breath to blow them out. You would need a fire extinguisher."

Tavella added that when people around the world started talking about Sister Andre's story, he realized it was "because we all need a bit of hope at the moment."

Sister Andre was born on February 11, 1904. She survived two World Wars. The Gerontology Research Group confirms details about people thought to be 110 or older. The organization lists her as the world's second-oldest living person. The oldest person on the list is Japan's Kane Tanaka, who turned 118 on January 2.

nun – n. a woman who is a member of a religious community and who usually promises to separate from the rest of society in order to serve God

dessert – n. a sweet food that is eaten after the main part of a meal

candle – n. a long shaped piece of wax with a piece of string in the middle that produces light as it slowly burns

extinguisher – n. a device containing water or other substances that is designed to put out a fire