Getting to Know the Verb 'Get'

Update Required To play the media you will need to either update your browser to a recent version or update your Flash plugin.
By Alice Bryant
01 December, 2016

So, Alice, what did you do last night?

Well, I was at home, getting ready to go to the movies. I was getting my shoes on when I got a feeling that something strange was going to happen.

I've gotten those feelings, too.

Then, I left the house, and got a cab, and got to the movies as fast as I could.

Did you get there on time?

Yes! But as soon as I got into the theater, I got a phone call from someone whose voice I didn't recognize. That's when things started to get weird...

Did you notice anything unusual in this story? The verb get is used 10 times -- and with several different meanings.

Get is one of the most commonly used, most tricky, and sometimes most hated words for English learners. When learning this verb, it is best to keep a sense of humor. 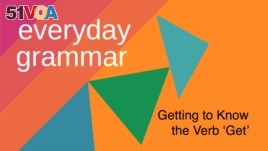 Getting to Know the Verb 'Get'

That is because the verb has more than 50 uses, such as when it appears as part of at least 12 phrasal verbs or other expressions.

Today on Everyday Grammar, we explore this simple three-letter word with many meanings. But don't worry. By the time you come to the end of the program, we hope you will begin to enjoy this captivating and changeable verb.

We will consider a few of the most common meanings of get and offer some ideas on how to use the verb.

Let's start with a very common meaning of get, which is to receive, obtain, or buy. The structure is:

Listening or reading for clues and then recognizing the meaning from those clues is the best way of explaining this meaning.

For example, take the following sentence:

I got an email from my friend Penelope.

In this sentence, does ‘got' mean received, obtained, or bought?

Here, the word got means received. We know that the person did not buy the email. We also know that they did not obtain it, since obtain means to acquire by effort.

I just got a new sofa!

In this example, does got mean received, obtained, or bought? It probably means bought, since the speaker does not provide any evidence that it was received.

Now, let's turn to a different meaning of get. This one means to bring or fetch. The structure is:

Listen to this example:

I'm going outside to get the mail.

Sometimes, however, the structure can be:

Listen to the example:

Could you get me my phone? It's in the bedroom upstairs.

In this sentence, the direct object is my phone and the indirect object is me. This is a structure you can use to ask someone to bring something to you. You would probably not use it unless the thing were fairly close. For example, if you left your mobile phone at a friend's house, and you will see the friend tomorrow, you would not say:

Could you get me my phone tomorrow?

Instead, you would say:

Could you bring me my phone tomorrow?

Now, you try it. Ask someone to bring something nearby to you.

Our next meaning of get is to arrive somewhere. There are two structures here. The first is:

Listen to a few examples:

What time will you get here?

I got to the concert late.

In these examples, the clue to the meaning of get is the name of a place right after the verb, such as "Tokyo," "the movies," "here" or "there."

Our last meaning of get on today's program is to become. The structure is:

Listen to a few examples:

The food is getting cold.

I get nervous when I have to speak in public.

In this use, the verb get simply replaces the verb become. You will recognize this easily when you hear or see an adjective immediately after get.

Here are three suggestions to help you better understand and use the meanings of get:

Tip #1: Guess the meaning from clues

Guessing can be your best friend when trying to understand and use the meanings of get. Use context clues to help you know how get is used. Context means words that are used with or next to a specific word or expression that helps explain its meaning.

Look for a direct object or a location adverb or an adjective before or after the verb get. These will help you to know its intended meaning.

Read and listen to as much as you can in English. The more you do this, the more easily you will be able to use clues as a tool to quickly understand meaning. Americans, the British, and other native English speakers can recognize these clues very quickly. You can learn to do this, too! Try to immerse yourself in English by listening to Learning English podcasts, watching movies and YouTube videos, and listening to music.

If you are not sure how to use some of the meanings of get, you can instead use verbs with similar meanings. Sometimes the other verbs sound natural, and other times they sound formal. For example, you can say, "I just bought a new sofa!" and it sounds perfectly natural. By comparison, saying, "I arrived home at 10 pm" sounds very official. Yet, both are correct and can be used.

Orin Hargraves is a lexicographer. He writes and studies dictionaries. Hargraves recently told Everyday Grammar that, "Many of the jobs that we currently give to get...can also be expressed by other verbs." Hargraves' advice is good advice.

The Everyday Grammar team hopes you enjoyed learning a few of the many meanings of the verb get. So, get going and enjoy this wonderful verb. We've got to go now. But keep listening in the coming weeks for more words with many meanings.

Alice Bryant wrote this story for Everyday Grammar. George Grow was the editor.

Have you noticed how often get is used in popular movies and music? Try to find an example and then write to us in the comments section. We want to hear from you.

verb - n. a word that is usually one of the main parts of a sentence and that expresses an action, an occurrence, or a state of being

phrasal verb - n. a group of words that functions as a verb and is made up of a verb and a preposition, an adverb, or both

obtain - v. to gain or get, usually by effort

acquire - v. to come to own something

fetch - v. to go after and bring back someone or something

intend - v. to have something in your mind as a purpose or goal

guess - v. to form an opinion or give an answer about something when you do not know much or anything about it

sofa - n. a long and comfortable piece of furniture on which a person can sit or lie down

immerse - v. to put (something) in a liquid so that all parts are completely covered