Governments Use the Internet to Enforce Blasphemy Laws


Many governments are taking steps to aggressively punish crimes against organized religion. Most notably, in majority Muslim nations, government officials are turning to anti-blasphemy laws to stop reported violations, especially against Islam. The violators are accused of blasphemy -- showing disrespect to God or to something considered holy.

In the past, blasphemy charges were brought against people for what they said in public. But now, observers say, governments are turning their attention to what people say or do while on the Internet or social media.

Peter Henne is with the Pew Research Center. He says 22 percent of governments have some form of anti-blasphemy laws. This includes at least one nation on every continent. 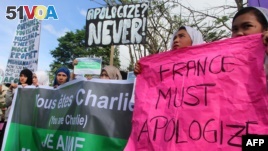 "Seventy percent of the nations that have anti-blasphemy laws are located in the Middle East or North Africa," he says. "Fourteen of the 20 nations in that region criminalize blasphemy." But they are not the only ones.

Peter Henne says Saudi Arabia, Pakistan and Indonesia are among the nations that take action in blasphemy cases most aggressively.

The Pew study did not exactly follow the sentences announced in each nation. But, in general, the severity of the punishment differed widely, from house arrest to life in prison or even death.

Raif Badawi is a 30-year-old blogger and Saudi citizen who launched the "Free Saudi Liberals" website. He wanted to have discussions about religion and Saudi religious leaders. He was found guilty of insulting Islam.

His punishment was a sentence of 10 years in prison and 1,000 lashes, also known as flogging. For 20 weeks, he is to be hit 50 times with a cane, or stick. His first public flogging, on January 9th, reportedly lasted about 15 minutes.

U.S. State Department official Jen Psaki says the punishment is "inhumane" and has called on Saudi Arabia to cancel his punishment. The Saudi government denounced the attack on workers at the French publication Charlie Hebdo over the issue of blasphemy. But it has shown no signs of changing the sentence of Raif Badawi.

More stories like his are becoming more common across large parts of the Middle East and North Africa. For example, in 2013 Kuwaiti blogger Hamad al-Naqi was found guilty of insulting the Prophet Muhammad while making comments on Twitter. He was sentenced to ten years in prison. In Mauritius, a blogger named Mohamed Cheikh Ould Mohamed was sentenced to death after being found guilty of insulting Islam and rejecting Islam. In Pakistan alone, more than 30 people have been sentenced to death or life in prison for blasphemous acts, either online or in person.

Observers estimate that around the world, at least 50 people are now in prison or facing death sentences for violating such laws.

And as Internet use spreads, so too do trials based on people's online activities.

Philip Luther is director of the Middle East and North Africa program at Amnesty International. In his words, "The web has made it easier for governments to prosecute people." Part of that, he says, is because online comments and social media posts live forever. They never go away.

Amnesty International has criticized Raif Badawi's trial. The group has called his sentence "a vicious act of cruelty" and, like the United States, is urging the government there to stop his punishment.

Philip Luther says the Saudi man has "done nothing more than express his views peacefully, and he should be released immediately and his sentence" over-turned.

Mr. Luther points to several nations as leading offenders, including Saudi Arabia, Egypt, Pakistan, Iran and Indonesia. He notes a big increase in use of blasphemy laws in Indonesia over the past 10 years. Only some of those 100 cases in Indonesia come from Internet use.

Mr. Luther says a growing number of government officials are using the World Wide Web and social media to gather evidence for possible charges. He says in Iran a man was sentenced to death last year for Facebook posts insulting the prophet of Islam.

And in Egypt, both Muslims and Christians have been prosecuted for not respecting religion online.

This report was based on an article from VOA's Doug Bernard. Katherine Williams wrote this story for VOA Learning English. George Grow was the editor.

blasphemy – n. great disrespect shown to God or to something holy

aggressively – adv. using forceful methods to succeed or do something

criminalize – v. to make (something) illegal

flogging – v. to beat or whip (someone) severely

prosecute – v. to hold a trial against a person who is accused of a crime to see if that person is guilty