Researchers: No Worry About Cancer From Cellphones

Update Required To play the media you will need to either update your browser to a recent version or update your Flash plugin.
By Susan Shand
19 February, 2018

Two United States government studies of cellphone radiation have found a weak link to an increased risk of cancer in animals.

But government officials and scientists are telling cellphone users not to worry. They say it is safe to use your mobile device. 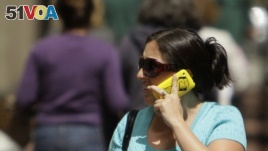 FILE - New research finds that there is no need to worry about getting cancer from holding your cellphone to your ear.

The latest research took a close look at the effects of very high radiation levels in animals to answer some questions that could not be tested on human subjects.

In one study, researchers left cellphones in an area with rats. The researchers say radiation from the devices may have been responsible for a small increase in an unusual form of heart tumor in male rats. Yet there were no big problems in female rats or in a separate study of mice.

The Associated Press (AP) says the scientists could not find strong evidence for concern about brain tumors.

Reaction to the findings

John Bucher is with the National Institute of Environmental Health Sciences. He was the lead writer of the report on the study. He told the AP he is not changing his cellphone use or asking his family to.

Otis Brawley is the American Cancer Society's chief medical officer. After reading the studies, he said, "I am actually holding my cellphone up to my ear."

The rat and mice studies are not the same as real-life cellphone use, he noted.

John Bucher said the findings of the rare nerve-tissue tumor found in the hearts of male rats does not mean humans should be worried.

His agency carried out a $25 million study for the Food and Drug Administration (FDA), which quickly said cellphones are safe.

Bucher said average cellphone use is "very, very, very much lower than what we studied."

He told reporters the rats and mice were exposed to the radiation for nine hours a day and for a period of up to two years. The radiation levels were so high that humans would only experience it for a short time.

For some unknown reason, the rats exposed to the radiation lived longer than the non-radiated rats. Bucher said that could be just chance, or it could be that the radiation reduced the risk of a rat disease.

The program released early test results two years ago. The earlier report showed a small risk of increased brain tumors in male rats. However, the final results were unable to confirm that.

The new rat study found evidence for increases in damage to DNA, brain tumors and a few other cancers, but it was not clear that it was related to the cellphones.

"Evidence of DNA damage was seen in some tissues of some animals," Bucher said. He added that he didn't have the evidence to comment on its biological importance.

Still, it was surprising that the animals did experience other effects, even if they were not at high enough levels to be important, said Leeka Kheifets. She is an epidemiology professor at the University of California, Los Angeles. She is also the former head of radiation studies for the World Health Organization.

"There is some concern that there is so much activity going on," she said. But "it's not like the sky is falling, a huge effect."

The findings failed to satisfy those concerned about cellphone radiation, like David Carpenter. He is the head of environmental health at the State University of New York in Albany. He said the studies were not large enough to uncover some rare problems and that the findings about brain tumors "cannot be dismissed."

"It's not anywhere near as dangerous as cigarettes," Carpenter said. But he added that there is a real danger from continual use of a cellphone.

In 2011, a working group of the International Agency for Research on Cancer said cellphones could possibly cause cancer. But many studies over the years have found little evidence of a problem.

Seth Borenstein and Lauran Neergaard reported this story for the Associated Press. Susan Shand adapted the report for Learning English. George Grow was the editor.

mobile – adj. involving something that can be moved

carcinogen – n. a substance that can cause cancer

epidemiology – n. the study of how disease spreads and can be controlled

expose – v. to cause to be affected or influenced by something; to leave without shelter or protection