How Fast Is ‘Two Shakes of a Lamb’s Tail’?

Update Required To play the media you will need to either update your browser to a recent version or update your Flash plugin.
By Anna Matteo
25 April 2020

The English language has many expressions that describe a fast-moving event. Some expressions relate to body movements. We say something happens in the blink of an eye or in a heartbeat. Other expressions are related to the world of nature.

Today we will talk about a speed-related expression involving an animal. Now, because we are talking about speed and animals, you might think it is a big cat, such as a lion or cheetah -- or maybe even a small, but speedy animal such as a hare.

But it is none of them.

The expression today involves sheep – baby lambs to be exact! 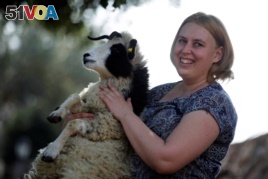 But why? Lambs are cute. But they are not really known for their lightning speed. Well, our expression is about a specific part of the animal – its tail.

I suspect lambs can shake their tails very fast. Because when something happens quickly, we say it happens in "two shakes of a lamb's tail." Here is an example:

"I'm going to the store. I'll be back in two shakes of a lamb's tail!"

This expression is a cuter and more descriptive way of saying "quickly." Maybe instead of sending a text message with the letters BRB (be right back), we could use the image of a lamb shaking its tail. That would fun!

Being cute like a lamb may be fun. But it has its drawbacks. Cute things are often not taken seriously. And this cute factor is the main reason Americans rarely use "two shakes of a lamb's tail" in a serious situation.

For example, if I see a person get hit by a car, I would not say, "Hold on! Help will be here in two shakes of a lamb's tail!"

That would not make the injured person lying in the middle of the street feel reassured. In an emergency like that, I would say something like, "Help is on the way!"

Generally speaking, an emergency is not a good time to use cute animal expressions.

Some language experts say "two shakes of a lamb's tail" was first used in written English in the 1800s. They think that it was used in spoken English much earlier than that.

You should know that we often shorten this expression to simply "two shakes" – as in, "I'll be there in two shakes!"

You should not use that one for emergencies either.

And that is Words and Their Stories for this week. But we will be back in two shakes of a lamb's tail. Well, actually...we'll be back next week!

Until next time...I'm Anna Matteo!

tail – n. the rear part of an animal or a usually slender flexible growth that extends from this part

drawback – n. something that causes problems