Update Required To play the media you will need to either update your browser to a recent version or update your Flash plugin.
By Dan Friedell
31 July 2021

Howard University announced on Twitter as Kamala Harris took the oath of office as Vice President of the United States on January 20 earlier this year. 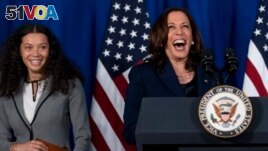 Howard is one of about 100 Historically Black Colleges and Universities, known as HBCUs, in the U.S. HBCUs started in the late 1800s so Black Americans could go to college at a time when many universities did not accept them.

Howard, about three kilometers from the White House, was founded in 1867. Its long list of famous graduates includes Nobel Prize-winner Toni Morrison, and actors Chadwick Boseman and Phylicia Rashad.

For most universities, having a graduate as the first female U.S. Vice President would be the year's most important moment. But for Howard, the news kept getting better.

In May, Rashad returned to the university to be the leader of the College of Fine Arts. And in July, two important Black writers, Ta-Nehisi Coates and Nikole Hannah-Jones accepted long-term teaching positions at Howard.

Ta-Nehisi Coates won the National Book Award for Between the World and Me. Hannah-Jones won the Pulitzer Prize as the creator of The New York Times' 1619 Project. Both could have gone to teach at any university, but they chose Howard. Hannah-Jones said she wanted to be at a school where she would be welcomed and not just tolerated.

"The buzz has been fantastic"

The moves signaled Howard's plan to become more than just a college for Black Americans. It wants to be a place where the nation's leading scholars and thinkers come to teach.

"The buzz has been fantastic," said Anthony Wutoh about the three new professors. He is the school's provost and a Howard graduate. The provost is one of a university's top leaders. Wutoh said the hires are part of Howard's recent improvement plan.

"... that as we continue to be increasingly a destination of choice for the best students and we can assure them that they will receive the best quality education, period, not only as a historically black college or university but the strongest academic experience that they can receive among the best institutions in the country."

Black students always saw Howard as a great place to study, make lifelong friendships and take leadership roles in student organizations. Even Harris, who ran and won the offices of attorney general and U.S. senator in California, says the most difficult political race she ever ran was for a position on the school's student council.

It's not just politics, arts, journalism and medicine that is causing people to think more about Howard. The school's sports teams are also getting some attention. Once the football and basketball teams at major universities in Texas, Alabama and Georgia accepted Black student-players in the 1960s, some of the best stopped going to HBCUs like Howard.

Just recently, NBA basketball star Steph Curry gave Howard $3 million to support its golf team. And Makur Maker, a basketball player from South Sudan who mostly grew up in Australia, became one of the highest-rated players to join Howard in many years. He had considered strong college basketball teams including UCLA, Kentucky and Memphis before choosing Howard.

Jonathan Rhone will start his final year at Howard later this month. The chemical engineering student grew up in Atlanta, Georgia. Although his parents met at Howard, he was not sure if he wanted to go there. At one point he thought he would go to the University of Colorado. But after three years, he is happy about his choice.

"One thing that's useful is that you get to focus more on your actual experience rather than focusing on a lot of external factors like worrying if you're going to be fitting in socially."

Rhone added that he met a lot of people at Howard who are "living proof" that you can go to an HBCU and "have a very, very successful life."

Rhone observed that Howard's president, Dr. Wayne Frederick, has been "aggressive" in spreading the word about Howard, especially its graduate programs, such as the medical school. Frederick worked as a cancer surgeon before taking the leadership role at Howard.

Jheannelle Johnson will start her second year at Howard after a year of learning from home in Florida because of COVID-19 restrictions. She said she is excited to meet other students and professors in person. But she is perhaps most excited about joining a large Black community in Washington.

Inside Higher Ed is a publication that centers on colleges and universities in the U.S. It calls 2021 a "breakthrough" year for many HBCUs in terms of drawing new students.

At Howard, Wutoh said the school is also drawing international students from Africa, the Caribbean, and surprisingly, Nepal.

"Many of whom are interested in information technology majors: computer science, computer engineering, information systems and it really started with one or two students who came to Howard had a great experience, and by word of mouth, you know, spread to other young people in Nepal."

Last year, Howard received a $40 million donation from MacKenzie Scott, the largest gift from a single donor in the school's history. Scott is the former wife of Amazon founder Jeff Bezos and a former student of Howard graduate, Toni Morrison. Recently, it received $20 million from several foundations and another donor. But more is needed as HBCUs like Howard were ignored for many years.

Wutoh said the school uses donations to reduce tuition. But it could not give money, known as a scholarship, to every student who is qualified. And the school has not been able to build new buildings and research centers.

"You know, we're not endowed the way a Harvard or Yale or (Johns) Hopkins is," Wutoh said. "We have students who are just as capable and exceptional and we need to be able to find ways to provide support to them."

What does Howard need to do to support its students? Tell us in the Comments Section and visit 51VOA.COM.

graduate– n. a person who has earned a degree or diploma from a school, college, or university

scholar– n. a person who has studied a subject for a long time and knows a lot about it : an intelligent and well-educated person who knows a particular subject very well

buzz – n. excited talk about something

destination– n. a place to which a person is going or something is being sent

focus– v. to direct your attention or effort at something specific

factor– n. something that helps produce or influence a result : one of the things that cause something to happen

endow – v. to give a large amount of money to a school, hospital, etc., in order to pay for the creation or continuing support of (something)