Update Required To play the media you will need to either update your browser to a recent version or update your Flash plugin.
By Armen Kassabian
12 December 2020


Now, Words and Their Stories, from VOA Learning English.

Sports are a great source of enjoyment and competition for people around the world. There are many expressions related to sports in English that we use in our daily lives.

In the United States, the most popular sports include baseball and American football. So, terms and sayings connected to those games are especially common.

We often use sports-related terms in our daily lives to describe moments of success, difficulty, failure and fairness.

Timothy Wahl teaches English as a second language to adults in Los Angeles, California. He also wrote the book, Footballogy: Elements of American Football for Non-Native Speakers of English.

Wahl says using sports idioms is a great way to sound more like a native speaker and better understand a new culture.

Knowing how to use American sports idioms can help people from different cultures make personal connections in a foreign place.

Here are a few expressions to practice. 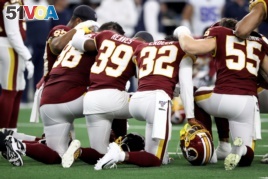 In this file photo Washington Redskins players huddle in the game at AT&T Stadium on December 29, 2019 in Arlington, Texas.

Let's consider the phrasal verb "huddle up." The verb "huddle" means to crowd together. In American football, the offensive team huddles throughout the game to discuss its plan of play. The team forms a sort of circle with their backs to everyone else. This helps keep the players' brief meeting private. They do not want the opposition to learn what moves they are planning to make.

Apparently, the football huddle began at Gallaudet University, a university for students who have hearing disabilities. The players use sign language, speaking through signs they make with their hands. So, the Gallaudet players faced each other so the other team could not see their hands.

Here is are two example sentences of the phrase used outside of football:

The students huddled up around the chemistry teacher as she performed the experiment.

The patient's doctor and family huddled up to discuss possible treatments.

One of the most common American football idioms is "a Hail Mary."

"Hail Mary" is the name of a Christian prayer. It is used in football to describe a play made by the losing team toward the end of the game. The play is not likely to be successful but is made in desperation.

The prisoner hid under a car in a Hail Mary effort to escape police.

The idiom "drop the ball" most often describes a situation where someone failed to do something important or necessary.

This term is used in many sports. A baseball, football or basketball player can "drop the ball," usually resulting in some kind of loss or penalty for their team.

In non-sports talk, you might say you "dropped the ball" if you did not finish your school work on time, or forgot to pay the electric company, or did not follow your supervisor's orders for a project at work.

Listen to this short discussion as an example:

Sorry, I'm late for work. I had to walk because there was no gas in the car. John was supposed to take it to the fuel station.

Wow. Didn't you also tell me that he left your phone outside in the rain yesterday?

Yep! He has really been dropping the ball lately, and only I seem to suffer the results!

practice – v. to carry out or perform a particular activity

phrasal verb – n. a phrase consisting of a verb and another element, typically a preposition

desperation – n. a state of despair or hopelessness