Update Required To play the media you will need to either update your browser to a recent version or update your Flash plugin.
By Susan Shand
07 August 2020


When historians look back to the summer of 2020, they might feel like time travelers in the Hollywood movie "Back to the Future."

"Empire Strikes Back" was the number one film during the second week of July. The Star Wars movie was first released 40 years ago. A week earlier, "Ghostbusters" which had come out in 1984 was the top movie. A week later, it was the 1993 film "Jurassic Park." 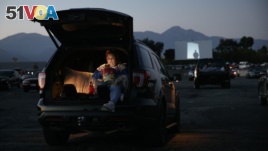 Serena Benavidez looks at her smartphone while waiting for a movie to start at Mission Tiki drive-in theater in Montclair, Calif., on May 28, 2020. (AP Photo/Jae C. Hong, file)

The coronavirus pandemic seems to bring back a lot of things from the past, from puzzles to drive-in theaters. But old movies are back for a different reason.

Most of the big movie theaters are still closed. So major new movie releases have been postponed to late August or early September.

Only 1,000 theaters, including 300 or so drive-ins, are currently open in the U.S. They have brought back popular movies from the past, like "E.T.", a movie about a young boy and an out-of-this-world creature.

Brian Keasey, of Montrose, Colorado, has been going to the theaters every week when he is not playing movies at home.

Keasey says he has seen "Jaws" three times this summer, including once on a screen next to a small body of water. "Jaws" is about a great white shark that jumps out of the water to attack people at a beach area. He said, "You can freeze frame any piece of that movie and it's a perfect slice of 1975 America."

"Jurassic Park" has been the most profitable, with more than $3 million in ticket sales this summer, say several people who have seen box-office numbers. The numbers are, of course, very low when compared to the billions of dollars new summer movies usually bring in.

There have been a few new releases like "Trolls World Tour" and "Onward." But "Jaws," "E.T.," "Goonies" and "Ghostbusters" are among this summer's most popular.

One new release, the low-budget movie "The Wretched," was the number one movie for seven straight weeks, probably because it was one of the few new films to see this summer. It has earned $1.8 million in 13 weeks. It was made for less than $100,000.

This year, it is possible that the most watched movies are "Hamilton" on Disney+ and "The Old Guard" on Netflix. But the services have not released the numbers of people who have watched them over the internet.

For Herb Geraghty, going to summer movies still hold romance. The 24-year-old found a new girlfriend just as the pandemic began. For several months they talked only on the internet. For their first evening together, they drove to a drive-in, laid out a blanket for a picnic and watched a movie.

"We do it pretty much every weekend now," says Geraghty.

pandemic - n. a contagious disease that spreads to other countries

puzzle - n. a picture that has been cut into many pieces that must be reassembled

childhood - n. the years leading up to age 18

picnic - n. a meal eaten on a blanket in a park