Update Required To play the media you will need to either update your browser to a recent version or update your Flash plugin.
By Phil Dierking
09 January, 2018


Iranian officials have banned the teaching of English in primary schools.

The move came after Islamic leaders warned that early learning of the English language has led to a Western "cultural invasion".

"Teaching English in government and non-government primary schools in the official curriculum is against laws and regulations," Navid-Adham said. He added that the government may also stop non-curriculum English classes.

The reasoning, Navid-Adham said, is that the groundwork, or basis, of Iranian culture should be taught to young children.

In Iran, English language training is usually offered in middle school, to students from 12 to 14 years of age. However, in some primary schools, students may begin taking English classes at younger ages.

The dangers of a "cultural invasion"

Iran's Islamic leaders have often warned about the dangers of "cultural invasion."

In 2016, Supreme Leader Ayatollah Ali Khamenei voiced concern over the "teaching of the English language spreading to nursery schools". 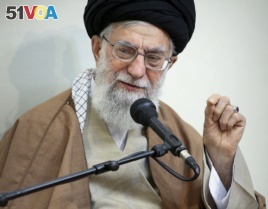 Supreme Leader Ayatollah Ali Khamenei speaks in a meeting, in Tehran, Iran, Tuesday, Jan. 2, 2018. Photo was released by an official website of the office of the Iranian supreme leader.

In a speech to teachers, Khamenei said that his concern, "Does not mean opposition to learning a foreign language, but (this is the) promotion of a foreign culture in the country and among children, young adults and youths."

Khamenei accused Western countries of promoting their cultures with Iranian youth as a way of expanding their influence in Iran, according to his office's website.

In the same speech, he urged Iranians to spend more time and money on the teaching of the Persian language, instead of English.

Last Saturday, Navid-Adham told state television that government officials want to strengthen "Persian language skills and Iranian Islamic culture at the primary school stage." He added that it would now be against the law to teach English at the primary school level, either during or outside of normal school hours.

The Reuters news agency reported that in the past, other languages have also been targeted by Iranian officials. In 2017, Iran's intelligence agency banned the publication of a Kurdish-language instruction book.

No link to protests

In his announcement, Navid-Adham did not link the new language education rules to recent anti-government protests. Iran's Revolutionary Guards have blamed foreign enemies for the unrest.

A video dealing with the announcement of the ban was widely shared on social media on Sunday. A number of Iranians have jokingly called it "The filtering of English." Some compare it to the blocking of the popular app Telegram by the government during the protests.

Do you think teaching English at the primary school level in a non-English speaking country is cultural invasion? We want to hear from you. Write to us in the Comments Section or on 51VOA.COM.

filter - v. to pass something, through a filter to remove something unwanted

nursery - adj. a room where children sleep, play, and are sometimes taught

promotion - n. something that is done to make people aware of something and increase its sales or popularity

regulation - n. an official rule or law that says how something should be done