Is Europe a Fortress?

Update Required To play the media you will need to either update your browser to a recent version or update your Flash plugin.
By VOA
16 November, 2015


The terrorist attacks that killed more than 100 people in Paris on Friday night complicate the refugee situation.

Europe is overwhelmed with how to register and integrate hundreds of thousands of migrants. They are streaming from the Middle East and Africa into Europe.

News agencies report that fingerprints were taken of a man who police say detonated a suicide bomb in Paris. In October, he was fingerprinted by Greek authorities as part of the refugee process. 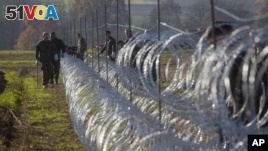 Slovenian soldiers erect a razor-wired fence on the Croatian border in Gibina, Slovenia, Nov. 11, 2015. The government aims to prevent the uncontrolled entry of more migrants in the already-overwhelmed alpine state. (AP Photo/Darko Bandic)

The Paris attacks confirm the fears of authorities who worry that mass migration includes terrorists.

European Union politicians have discussed how to reduce migration from countries like Syria and Eritrea. Some EU countries are shutting their borders.

In the wake of Friday's massacre, French President Francois Hollande tightened his country's borders and declared a state of emergency.

The Schengen Agreement eliminated the EU's internal borders in 1995. It allows for passport-free travel between 26 nations. But the agreement also allows for temporarily reinstating border controls for security reasons.

Other times countries have tightened their borders in recent years include events like the soccer World Cup or major policy conferences.

Before Friday's attacks, some countries with liberal immigration policies tightened border security because of the wave of refugees and migrants. Now those borders may be sealed for some time.

To understand how many people are entering Europe, think of this: More than 200,000 migrants made their way to Europe in October.

That's more than the number of people who made the trek into Europe from distressed countries in all of 2014.

The United Nations and other agencies that track the welfare of migrants and refugees say there are almost 750,000 new arrivals in Europe this year.

For example, Slovenia recently built a barbed-wire fence along its border with Croatia.

At the sea crossings, the death toll seems to increase every day. Flimsy boats make their way into water that is rougher and colder each day.

The International Organization for Migration said this month almost 3,500 migrants have died along this route into Europe in 2015.

The Greek and Turkish coast guards are not able to save every boat that gets into trouble. Last week, the Turkish state-run news agency reported 14 migrants drowned in the Aegean Sea.

And nobody knows what to do with people waiting at borders to be processed or relocated to places like Luxembourg.

For years, Sweden had one of the most liberal immigration policies. But it plans to introduce temporary border controls, too.

There are fewer than 10-million people in Sweden. Up to 200,000 refugees and migrants are expected to arrive this year. That is by far the largest proportion of refugees in Europe.

Sweden has accepted refugees and immigrants for years. And it has strong assimilation policies.

New arrivals in Sweden are offered skills assessments so they can be placed in suitable jobs. They are also offered free language classes.

But what happens if these migrants fail to find work or adapt to life in Sweden?

Experts are concerned about immigrant communities and governance. Acceptable practices in some countries are not accepted in others.

For example, the European Institute for Gender Equality says lawmakers should be mindful of practices like female genital mutilation. This practice is a crime in the European Union. It is punishable by jail time in most countries.

Host countries are struggling with the balance between Western and Muslim legal traditions. As the humanitarian crisis continues, that struggle is not expected to end soon.

This story appeared on VOANews.com. Dan Friedell adapted it for Learning English. Kathleen Struck was the editor.

What do you think the long-term effects will be of migrants arriving in Europe? We want to hear from you. Write to us in the Comments section or on our 51VOA.COM.

assessment – n. to make a judgment

assimilation – n. becoming part of a new society or country

barbed – adj. having a sharp point that sticks out and backward from a larger point, having a barb

capsize – v. to turn over so that the bottom is on top

eliminate - v. to end something

integrate - v. to mix, to bring people into a country or an organization

proportion – n. an amount in comparison to another amount

shut - v. to close or restrict

toll – n. the number of people who are killed or injured in an accident, disaster, war, etc. — usually singular

trek – v. to walk for a long distance