Japan Not Worried About Robots Taking Their Jobs

Update Required To play the media you will need to either update your browser to a recent version or update your Flash plugin.
By Phil Dierking
26 August, 2017


In a factory near Tokyo, thousands of cans are filled with beer, capped, washed, and put into boxes at speeds of 1,500 cans a minute.

However, there are hardly any people in sight as the cans speed through processing.

Japan's Asahi Breweries operates the factory. The machines do almost all of the physical work. Humans make sure that the machines do the work right, and the automated sensing devices are working correctly.

"Basically, nothing goes wrong. The lines are up and running 96 percent," said Shinichi Uno, a manager at the factory. "Although machines make things, human beings oversee the machines." 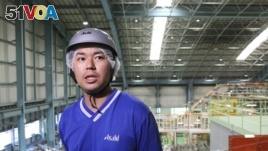 While some countries, like the U.S., are debating the issue of robots taking jobs from humans, in Japan, the discussion is much different.

Birth rates in Japan have been decreasing for many years. This has caused many in the country to fear the possibility of a labor shortage.

The introduction of robots has filled this need for labor. The robots appear to be a welcomed addition to the workforce in Japan.

Starting in the 1990's, Japan began a big push to develop robots for the workforce. It currently leads the world in the use of robots.

There are 1,562 robots for every 10,000 human workers. This is higher than Germany, with 1,133 robots, or the U.S., with 1,091 for every worker. The numbers come from a White House report submitted to Congress last year.

The report says Japan also was ahead in robots used outside of the automobile industry, with 219 robots per 10,000 workers, compared to 76 for the U.S. and 147 for Germany.

There are some differences with Japan's work culture that might influence Japanese opinions about giving jobs to robots. One important difference is their "lifetime employment" system.

In Japan, many major companies often keep their workers, even if their skills become outdated. They will use them instead for other tasks, said Koichi Iwamoto, a senior fellow at the Research Institute of Economy, Trade and Industry.

The Organization for Economic Cooperation and Development, or OECD, gathers information about the use of robots in its member countries.

However, the OECD data showed employment conditions remained almost unchanged for Japan for the period from 2002 to 2014.

That means companies in Japan were not trying as hard as those in the U.S. to replace humans with robots. Clerical workers, for example, were keeping their jobs although computers might do their jobs better.

Another example is how Japanese society has so far preferred to keep taxis instead of shifting to online ride services.

But, machines have increasingly replaced people in Japan. Iwamoto says the country now has entered a "reflective stage." He says people are actually interested in having "human harmony with machines."

"Some tasks may be better performed by people, after all," said Iwamoto.

Kiyoshi Sakai also is an Asahi employee. He has worked at the company for 29 years. He said that in the past can caps were put into machines by hand. This was a repetitive task that was hard on the body and the mind.

Now, machines have replaced many of those jobs, and he is grateful for the changes to his work life. Machines at the plant have become more than 50 percent smaller over the years. They are faster and more precise than 30 years ago.

He said in the past, things used to go wrong all the time and people had to check the machines every 10 to 15 minutes. Now, problems with machines are so rare that people do not need to worry.

Like many workers in Japan, Sakai is not worried about his job disappearing. After people no longer needed to work on assembly lines, his position was upgraded to the general affairs section, a common administrative department in Japanese companies.

"I remember the work being so hard. But when I think back, and it was all about delivering great beer to everyone, it makes me so proud," said Sakai, who drinks beer every day.

"I have no regrets. This is a stable job."

This story was originally written by Yuri Kageyama for the Associated Press. Phil Dierking adapted the story for VOA Learning English from an Associated Press report. Mario Ritter was the editor.

Do you think more jobs should be replaced by machines, if the machines can do them better? We want to hear from you. Write to us in the Comments Section or on 51VOA.COM.

manager -n. someone who is in charge of a business, department, etc.

assembly lines –n. a series of workers and machines in a factory by which a succession of identical items is progressively assembled.

automate –v. to run or operate (something, such as a factory or system) by using machines, computers, etc., instead of people to do the work

can –n. a closed metal container that is usually shaped like a cylinder and that holds food or drink

cap –v. to cover the top or end of

clerical –adj. of or relating to a clerk or office worker

stable –adj. in a good state or condition that is not easily changed or likely to change