Update Required To play the media you will need to either update your browser to a recent version or update your Flash plugin.
By Hai Do
07 March, 2018


Over the past 12 months, an American businessman became the world's first 100-billion-dollar man. But Donald Trump's wealth sank during his first year as president of the United States.

Those are just two findings from Forbes magazine's latest report on the wealth of the world's richest people.

The report, released on Tuesday, says the world now has 2,208 billionaires. They have a combined wealth of $9.1 trillion, an increase of 18 percent compared to one year earlier.

Forbes says Jeff Bezos is now the richest person on the planet. Most of his wealth comes from shares of stock in Amazon, the e-commerce company. Amazon shares rose 59 percent during the past year.

As of February 9, 2018, Bezos' wealth stood at $112 billion, up from about $73 billion last year. The increase was enough to overtake American Bill Gates, who helped to set up Microsoft Corporation. 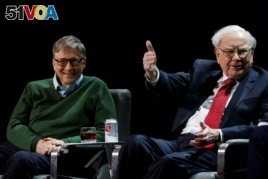 Gates finished second on Forbes' list with $90 billion. Another American -- businessman and investor Warren Buffett -- is now in third place, with $84 billion.

Both Gates, age 62, and Buffett, 87, have said they plan to give away most of their wealth while Bezos, 54, has not said much.

The fourth richest person is Bernard Arnault of France. He owns the luxury goods company LVMH. His wealth is valued at $72 billion.

Most of the top 20 billionaires on the list have ties to technology companies. They include Mark Zuckerberg of Facebook, Larry Ellison of Oracle, as well as Larry Page and Sergey Brin of Google.

The world's youngest billionaire is Alexandra Andresen of Norway. She is 21 years old. Her wealth of $1.4 billion came from a family-owned investment company.

At the age of 99, Chang Yun Chung of Singapore is the world's oldest billionaire. He founded an international shipping company with two second-hand vessels. He is now worth $1.9 billion, and the company has a fleet of 155 vessels.

There are 259 new faces in the latest list of billionaires. China has the most new faces with 89. The United States is next with 18. But the U.S. still has more billionaires than any country: 585, in all. And greater China, including the mainland, Hong Kong, Macau and Taiwan, has 476.

Most of the world's billionaires added to their wealth last year because of rising stock markets. But the magazine noted that President Donald Trump's wealth actually dropped about $400 million, to $3.1 billion, during his first year in office.

The decline left him as the world's 766th richest person, down from 544 on Forbes' list last year.

Hai Do adapted this report for VOA Learning English from a Forbes magazine story. George Grow was the editor.

stock - n. a share of the value of a company which can be bought, sold, or trade as an investment

luxury - n. something that is expenseive and not necessary