Update Required To play the media you will need to either update your browser to a recent version or update your Flash plugin.
By VOA
07 August, 2015


Vietnamese and United States officials are marking the 20th anniversary of the normalization of diplomatic ties between the two countries. Vietnam is holding a series of anniversary events in the capital city of Hanoi.

At one event Friday, U.S. Secretary of State John Kerry said the improvement in relations took time and "didn't come easy for either side. It took us 20 more years to move from healing to building," he added. "Think of what we can accomplish in the 20 years to come."

Relations between the United States and Vietnam were cut 40 years ago as the Vietnam War came to an end. In recent years, the two sides have formed strong economic ties. Last year, two-way trade topped $36 billion.

Vietnam's Deputy Prime Minister Pham Binh Minh spoke at a civil society meeting Friday. The Vietnamese official said he believed relations between the two countries would be raised to an even higher level. 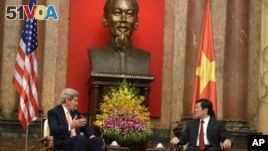 The U.S. government continues to voice concerns about Vietnam's human rights record. The State Department's latest human rights report is critical of Vietnam in a number of areas, including "severe restrictions on citizens' political rights" and police attacks. It also criticizes the country for arresting or detaining too many people for no apparent reason.

Secretary of State Kerry spoke about human rights during his visit.

"Now is there still room for improvement going forward? Yes, profoundly so. Yes, there is. And we will continue to urge Vietnam to reform certain laws that may have been used to arrest or convict somebody for expressing a peaceful point of view. That's something that we obviously believe should not occur."

He added that, "Progress on human rights and the rule of law will provide the foundation for a deeper and more sustainable partnership between the United States and Vietnam."

"The more we have in common, the easier it will be to convince our people to deepen our bonds and make sacrifices on each other's behalf," he said.

Both the U.S. and Vietnam are now part of negotiations for a major 12-nation trade deal known as the Trans-Pacific Partnership.

Greg Poling studies Asia for the Center for Strategic and International Studies. He said, "Vietnam by far stands to benefit the most from the TPP." He said the deal would not only increase Vietnamese exports to the United States, but also to Canada and Japan.

Last month, Mr. Trong visited President Barack Obama at the White House. "There has been a bad, difficult chapter our history," said Mr. Trong during a joint appearance with Mr. Obama. "But we have been able to rise above the past to overcome differences, to promote our shared interests and look towards the future," he added.

certain – adj. some; known for sure

sustainable – adj. being able to continue at the same level or rate

behalf – n. as a representative or; in the interests of a person or group

benefit – n. a good or helpful effect or result

chapter – n. a period of time