Update Required To play the media you will need to either update your browser to a recent version or update your Flash plugin.
By VOA
22 September, 2014


Kurdish fighters in northern Syria continue to battle Islamic State militants. More than 130,000 civilians have fled to neighboring Turkey. They began to move last week when the militants launched an attack against the town of Kobane along the Syria-Turkey border.

One Syrian Kurd said he brought his family into Turkey for safety but now is headed back to fight the Islamic State.

He said, "We are returning back to fight. We will fight there until the last drop of our blood. If we lose Kobane it means we lose the Rojova (Syrian Kurdistan) region."

The Deputy Prime Minister of Turkey said Turkey is prepared for the arrival of hundreds of thousands of refugees. 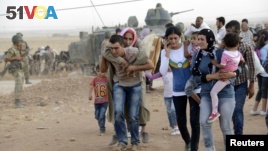 Turkey has already taken in about 850,000 Syrian refugees since a civil war began there in March 2011. An estimated 300,000 have arrived this year.

The Islamic State group urged its followers on Monday to attack citizens of the United States, France and other countries. The threatened countries are part of a coalition formed to destroy the militant group.

Islamic State spokesman Abu Muhammad al-Adnani told the militant group's followers: "If you can, kill a disbelieving American or European -- especially the spiteful and filthy French -- or an Australian, or a Canadian or any other disbeliever."

The U.S. and France have both carried out airstrikes against the Islamic State group in Iraq.

The World Health Organization says the Ebola virus has been contained in Nigeria and Senegal. The organization also says the virus now has killed more than 2,800 in the larger area.

The WHO's Africa office said there have been no new cases of Ebola reported in the two countries since the first was reported in Senegal August 29.

A separate WHO report said Guinea, Liberia and Sierra Leone continued to report new cases of the disease. It said the total number of cases in West Africa has risen to 5,864 and the number of deaths has increased to 2,811.

Three Afghan National Army soldiers reportedly have been found in the United States near its border with Canada. The soldiers disappeared from training at a U.S. military base in Massachusetts Saturday. The news station WCVB-TV reports that police detained the men at a border crossing near Niagara Falls, New York, Monday.

Military officials did not immediately answer requests for comment. The report could not be independently verified.

lose – v. to have no longer; to not find; to fail to keep; to be defeated

urge – v. to advise strongly; to make a great effort to get someone to do something

case – n. an incident of disease ("There was only one case of chicken pox at the school.")

disappear – v. to become unseen; to no longer exist