Update Required To play the media you will need to either update your browser to a recent version or update your Flash plugin.
By Dan Friedell
28 March, 2017

The Bode Museum in Berlin, Germany is known for its collection of 540,000 rare coins. 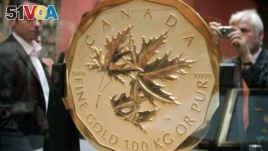 Visitors take a look at the world's biggest and most expensive gold coin, the "Canadian Maple Leaf", on Wednesday, May 28, 2008, at Vienna's art history museum. A similar coin was stolen in Berlin this week.

The collection's largest coin has been stolen. The giant coin weighs 100 kilograms and is 53 centimeters wide.

The Royal Canadian Mint produced the coin. It is known as "Big Maple Leaf."

The face value of the coin is $1 million. But experts say it may be worth up to $4 million because its gold is so pure.

The museum kept the coin behind bulletproof glass. But, thieves managed to break the case.

Berlin police believe the thieves climbed in through a window at the back of the museum. The window is next to train tracks. Police say the thieves used a ladder to reach the window, dropped into the museum, broke the case and took the coin.

Since the coin was so large, police are looking for a group of suspects.

They say the break-in happened early Monday morning, when trains were not operating. They believe the thieves were in and out of the museum in just 25 minutes.

The police have not said if there is security video of the crime. People on social media say the robbery seems like something you would see in a movie.

Others are questioning how the thieves got such a heavy coin out of the museum. One person guessed that the thieves must all be weightlifters.

Others want to know what they will do with the coin, since they can't sell it. And of course, they cannot use it in a vending machine to buy a snack, one Twitter user joked.

Experts think the thieves may try to melt the coin into smaller pieces and try to sell the gold.

What do you think will happen to the coin? We want to know. Write to us in the Comments Section or on 51VOA.COM.

vending machine – n. a machine that you put money into in order to buy food, drinks, cigarettes, etc.

snack – n. a small amount of food eaten between meals

face value – n. the value that is printed or shown on something (such as a coin or bill)