Some People Want to #BoycottHawaii

Update Required To play the media you will need to either update your browser to a recent version or update your Flash plugin.
By Dan Friedell
16 March, 2017

Before that, it was a U.S. territory.

Hawaii is in the middle of the Pacific Ocean. It is made up of eight islands, including Oahu, Maui and the largest island, called Hawaii.

Hawaii is known for its unique culture, beautiful rainforests, volcanoes and sandy beaches. 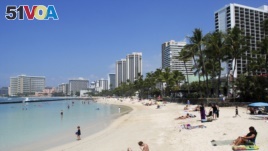 In this Monday, March 13, 2017 photo, people relax on the beach in Waikiki in Honolulu. (AP Photo/Caleb Jones)

But people now say they will not travel to Hawaii. The hashtag #BoycottHawaii is trending on Twitter.

The online call for a boycott began on Wednesday evening. That is when a federal judge in Hawaii froze President Trump's executive order banning visitors to the U.S. from six mostly Muslim countries for 90 days.

The ban prevents all refugees from entering the United States for 120 days.

He described the order as "fundamentally flawed."

A federal judge in Maryland supported Watson's decision on Thursday. That judge said the order was an attempt to ban Muslims from coming to the U.S.

Supporters of the president are saying on social media that people should protest Judge Watson's decision by not traveling to Hawaii.

For example, one Trump supporter asked: "Why should Hawaii ... control who can come in? I don't think so!" He said Hawaii is too far away from the rest of the U.S. to be able to make such big decisions.

Others wondered if they should make plans to visit other beaches, instead of those in Hawaii. A user named Theresa said she was making plans to visit Florida.

But, many people supported the judges' rulings. They, too, used the hashtag #BoycottHawaii on Twitter to express their opinions.

Some Twitter users celebrated the fact that Trump supporters would not visit Hawaii anytime soon. They said that would make Hawaii even nicer and more enjoyable.

The North Shore is on the Hawaiian island of Oahu.

Some people said Judge Watson put the U.S. in danger by rejecting Trump's ban. They said people in Hawaii do not have the same concerns about safety as other Americans do.

But, one political writer asked if some Twitter users have forgotten what happened on December 7, 1941, during the Second World War. That is when the U.S. Navy, in Pearl Harbor, near Hawaii's capital Honolulu, was attacked by Japan. That day, more than 2,000 Americans were killed.

Will you plan a trip to Hawaii sometime soon? We want to know. Write to us in the Comments Section or on 51voa.com.

territory – n. an area of land that belongs to or is controlled by a government

executive order – n. an order that comes from the U.S. President or a government agency and must be obeyed like a law

flaw – n. a small physical problem (such as a crack) that makes something less valuable

echo – v. to have a feature or quality that repeats or resembles (something else)

discriminate – v. to unfairly treat a person or group of people differently from other people or groups