Law Enforcement Struggles to Find Officers Since Killing of Floyd

Update Required To play the media you will need to either update your browser to a recent version or update your Flash plugin.
By Gregory Stachel
20 June 2021


Law enforcement agencies across the country have experienced a wave of retirements and resignations. Agencies are having a difficult time finding the next generation of police officers in the year following the killing of George Floyd by a police officer.

George Floyd was killed in Minneapolis, Minnesota, by former police officer Derek Chauvin on May 25, 2020. Derek Chauvin was found guilty of murder and is awaiting sentencing.

While the country is having a discussion on policing, communities are questioning who should become a police officer today.

Large protests, calls for reforming or defunding the police, as well as the coronavirus pandemic have hurt police officers' spirit. 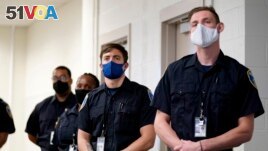 In this Sept. 9, 2020, photo Zachary Ruhling, center, a training police officer in the Baltimore Police Academy, watches a video presentation during a class on justice in Baltimore. (AP Photo/Julio Cortez)

Washington-based Executive Research Forum provided The Associated Press research on nearly 200 law enforcement agencies. It found that retirements in some departments rose 45 percent compared to the year before.

It is one of the only efforts to examine police recruiting since the killing of George Floyd. The study looked at police officers who resigned or joined the force in 194 police departments out of the 18,000 in the country. It compared these findings for the dates between April 1, 2020 and March 31, 2020 to the same dates from 2019.

The wave comes as local lawmakers have said they will push for reform and reshape policing in the 21st century. For example, many communities are ending the policies that give police officers immunity for their actions while on-duty.

Recruiters are increasingly looking for a different kind of police officer to join the troubled departments.

Recruiters in the past wanted men and women who were physically strong. Now, police departments are looking for recruits who can use their brain. And they want those future officers to represent their communities.

Atlanta Police Chief Rodney Bryant said, "We're looking for someone who can actually relate to the community, but also think like the community thinks."

While the opinions of those in law enforcement about policing in the past year is not well-documented, public opinion is. The Associated Press-NORC center for Public Affairs Research asked Americans what they thought of the police. It found as many as half of American adults believed police violence against the public is a "very" or "extremely" serious problem in the past year.

Some police officers have protested in the last year. Many stayed out of work, claiming to be sick, in an event called the "Blue Flu."

There are still difficulties in the recruitment process. Departments in some cities like Philadelphia are searching candidates' online pages to look for possible biases. Also, police departments offer different wages in different cities. The ones that offer less are having problems finding candidates.

In Dallas, Texas, city leaders spent much of the last ten years finding new recruits. Many officers were leaving due to low pay and a collapse of their retirement plans.

The force now stands at about 3,100 officers. This is down from 3,300 in 2015. The city's population has grown to more than 1.3 million since then. This means officers take more calls and more cases, all during an increase in racial problems.

In 2016, five officers were killed in Dallas when they were shot by someone seeking revenge for police shootings that killed or hurt Black men. Two years later, an off-duty officer shot and killed a neighbor in his home. The officer was fired and later sentenced to ten years in prison for murder.

Mike Mata is the president of the Dallas Police Association. He said the national political climate, the low pay, and the lack of good retirement plans have combined to cause a recruiting problem in Dallas.

defund – v. to prevent money for (something)

immunity – n. special protection from what is required for most people by law

bias – n. a tendency to believe that some people, ideas, etc., are better than others that usually results in treating some people unfairly