Update Required To play the media you will need to either update your browser to a recent version or update your Flash plugin.
By Anna Matteo
20 June 2021


Crowds of foreign visitors usually enjoy the scenic trails in Nepal's Himalayan mountains. But for more than a year, the trails have been empty. And most of the country's tourism industry is still shut down by the pandemic.

That means tens of thousands of Sherpa guides have been left without the work needed to feed their families. Ang Phurba Sherpa has been trying to help those struggling the most during the pandemic. He told the Associated Press that he also hopes his actions lead others to do the same. 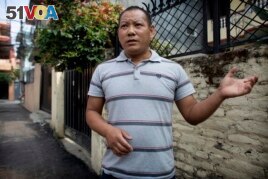 Sherpa has been loading his truck with large bags of rice, lentils, cooking oil and other necessities. He bought the food supplies with his own money and delivers them himself to many families in Kathmandu.

Sherpa told reporters: "I am trying to help in any way I can because I thought I should give to our community ..."

He adds that the guides have no work and need help. Nepal normally has two trekking seasons each year — spring and autumn. That is when the majority of foreigners come to hike the trails that cut through the country's snow-covered mountains.

In 2019, about 171,000 tourists visited Nepal to trek. They paid for hiking guides, ate in restaurants, slept at inns, and bought equipment. In 2020, there were hardly any tourists. It is the same again this year.

Nepal reopened to tourists in March, but only a few hundred foreigners have come. Also, they come to climb the country's famous mountains, such as Mount Everest, and not to trek.

"The guides are facing lots of trouble and they are in pain..." Sherpa said.

As a trekking guide himself, he said he is also in "a difficult situation." But he said he wants to help his fellow guides and hopes they will "come out to help each other." Their situation has been made worse by a new lockdown that started in April as cases of the COVID-19 virus increased in the area.

Sherpa has helped Kunjun Lama, another guide. He has been struggling to feed his family of six. He said the rice and oil he received would help his family for a month.

"It has been two years and I have had not had any trekking guide work," Lama said. He added that "the worst part is there is no other work available at all right now."

As well as helping his fellow guides, for the past three months Sherpa has been taking food to a shelter for 57 disabled children.

Shelter operator Dendi Sherpa said the main source of money had been his own pay from guide work. Without that, he had been struggling to run the shelter.

"But with help like this we are able to feed the children," he said.

Binaj Gurubacharya reported this story for the Associated Press. Anna Matteo adapted it for VOA Learning English. Susan Shand was the editor.

scenic – adj. having, providing, or relating to a pleasing or beautiful view of natural scenery (such as mountains, hills, valleys, etc.)

trail – n. a path through a forest, field, etc.

trek – v. to travel by walking through an area with many mountains, rivers, etc., for pleasure and adventure (also a noun)

hike – v. to walk a long distance especially for pleasure or exercise : (also a noun) to go on a hike

fellow – adj. belonging to the same group or class