Update Required To play the media you will need to either update your browser to a recent version or update your Flash plugin.
By John Russell
14 November 2020


Heart drugs and all kinds of other medicines have disappeared from drug stores across Lebanon. The drug shortage is the latest in a series of problems in the country, which was once a center for medical services, banking and real estate.

Rita Harb works as a nurse at a hospital in Beirut, the capital. She cannot find heart drugs for her 85-year-old grandfather. 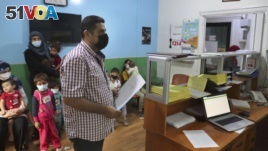 She has searched Lebanese drug stores and called friends overseas. Not even doctors she knew could get the drugs from pharmacies or other providers.

Officials and pharmacists say the drug shortage was made worse by panic buying and hoarding after an announcement by the country's Central Bank governor. He said that with the supply of foreign money running low, the government would not be able to keep up subsidies, including subsidies on drugs.

That announcement "caused a storm, an earthquake," said Ghassan al-Amin, head of the Order of Pharmacists of Lebanon.

Many Lebanese now search the country and beyond for necessary drugs. Older adults ask religious organizations and aid groups for help.

In the country's economic crisis, more than half the population has been pushed into poverty. Lebanon's money has lost nearly 80 percent of its value. People's savings also have dropped in value.

Lebanon imports nearly everything, including 85 percent of its drugs.

Lifting subsidies is a likely step for the government. This is expected to increase prices and inflation. Fixed at 1,500 to the U.S. dollar for many years, the Lebanese pound is now worth around 7,000 for $1 on the black market.

The difference between the official and black-market dollar rate has fueled smuggling. In other words, subsidized Lebanese drugs were secretly taken to neighboring countries.

In the chaos, six out of every 10 brand drugs have become unavailable, notes Malak Khiami, the pharmacist at Amel Association, an aid group.

For years, around 20 importers have controlled Lebanon's drug market. Lebanese law awards rights to some drug importers, giving them power to resist reforms and keep out competitors.

The import rights are part of Lebanon's economic order, which after the civil war's end became controlled by militia chiefs, wealthy traders and real estate owners.

In the Zoukaq al-Blat neighborhood of Beirut, Mahmoud Mahmoud's pharmacy was quiet. Except for painkillers and other products, the store's shelves were empty.

Mahmoud believes suppliers are holding back drugs because they are waiting for higher prices — or smuggling them out of the country. One gout drug, he said, was found in Iraq, selling for $7, more than five times its price in Lebanon.

Sarah El Deeb reported this story for The Associated Press. John Russell adapted it for VOALearning English. George Grow was the editor.

real estate – n. property such as land or buildings

black market – n. a system through which things are bought and sold illegally

shelf – n. a flat object that provides a surface for storing objects on which objects can be placed

gout – n. a disease that causes painful enlargement of the joints, especially in the toes