A Little Exercise Is Better Than None

Update Required To play the media you will need to either update your browser to a recent version or update your Flash plugin.
By Anna Matteo
03 April, 2017

Exercise is good for us. It reduces the risks of dying from all causes, including cancer and heart disease. This is according to the World Health Organization.

But many people who work all week have little time for exercise.

So, they might try to do something to increase their heart rates over the weekend – go for a long run, take a bike ride, hike in the mountains or do a strenuous chore around the house, such as raking leaves, shoveling snow or digging a garden. 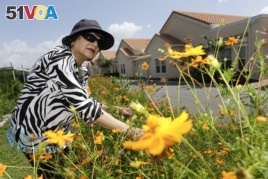 Gardening is a popular outdoor activity for many during the weekend. It's good exercise too. (AP Photo)

We sometimes call people who exercise only on Saturdays and Sundays "weekend warriors." But is it healthy to avoid exercise during the work-week and then try to fit it all in during the weekend?

A new study suggests that, yes, it is healthy: Even weekend warriors may reduce their risk of cancer and cardiovascular disease.

Benefits of being a weekend warrior

Australian researchers at the University of Sydney conducted the study. It took place over a nine-year period.

During that time, the researchers looked at the self-reported exercise habits and health examinations of more than 63,000 adults in England and Scotland. Then they connected that information to mortality – or, death – records.

The researchers found that people who exercised only one or two days a week improved their chances of living longer than people who did not exercise at all.

Even those who are very overweight – or, obese – could extend their lives by exercising a couple of days per week. Exercises included playing sports and taking a brisk walk.

First, let's look at cancer. When compared to those who did not exercise at all, weekend warriors had an 18 percent lower risk of dying from cancer.

Emmanuel Stamatakis is the senior author of the study. He says that he found it "very encouraging" that even people who exercised as little as one or two times a week appear to lower their risk of early death.

In other words, their health improves even if they don't meet the suggested weekly amount of physical activity. However, to be in the best health, Stamatakis says, more exercise is better.

The WHO suggests that the average adult get at least 150 minutes of moderate to intense activity per week. For the best results, the organization suggests 75 minutes per week of vigorous physical activity.

However, if you are busy with work and family duties, exercise as much as you can. Research seems to show that even a little is definitely better than none at all.

The researchers published their findings in the journal JAMA (JAM-ah) Internal Medicine.

obese ­– adj. very fat : fat in a way that is unhealthy

specifically – adv. in a definite and exact way

moderate­ – adj. average in size or amount : neither too much nor too little