Update Required To play the media you will need to either update your browser to a recent version or update your Flash plugin.
By Jim Dresbach
10 May, 2016

The Wall Street Journal says the companies could be offering service "within a year."

The newspaper said the tests will involve GM's electric-powered Chevrolet Bolt. But it did not say where the first test will take place.

GM has reportedly invested $500 million in Lyft Inc. The partnership is seen as a way to compete against Uber, another ride-sharing company. 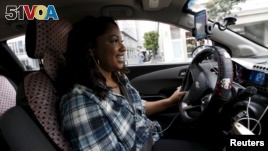 GM also is planning to buy Cruise Automation Inc. for a reported $1 billion. The California-based company has been developing self-driving car technology for two years, the newspaper reported.

The move is seen as a way for the automaker to sell the Bolt. It will be available later this year in a market for electric cars that the Journal described as "soft."

It is also seen as a way for GM to compete with U.S. technology companies interested in building driverless cars.

Both Tesla Motors and Alphabet Inc. have been developing such vehicles for years. Alphabet is part of the U.S. technology company Google.

Lyft reportedly is also developing driverless cars at its own research center in Pennsylvania. The company "is preparing for autonomous vehicles in its fleet by 2020," the Wall Street Journal reported.

It added that improvements in driverless cars are hurt by "a patchwork of regulations that govern the use of autonomous vehicles and liabilities."

The Wall Street Journal said Lyft will have drivers in the cars "ready to intervene" should something go wrong.

taxis – n. cars that carry passengers to a place for an amount of money that is based on the distance traveled

patchwork – n. something that is made up of different things

autonomous – adj. existing or acting separately from other things or people

liability – n. the state of being responsible for something