One in Four Americans Make Money from the Online Economy

Update Required To play the media you will need to either update your browser to a recent version or update your Flash plugin.
By VOA
24 November, 2016


Nearly one in four Americans made money over the last 12 months by using their personal computers or other devices connected to the I nternet.

The Pew Research Center, an independent research group in Washington, found that people are using the Internet to find extra work.

They go online to sell things such as used books and furniture or they offer to provide services such as babysitting, house cleaning or computer repairs. 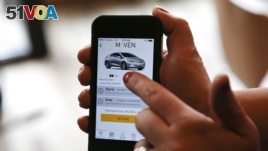 This April 27, 2016, photo, shows a smartphone displaying the Maven app, a General Motors car-sharing service, in Ann Arbor, Mich. Automakers are reinventing themselves as "mobility" companies that can help people get around. Already this year, General Motors Co. announced a long-term agreement with ride-hailing company Lyft and started a car-sharing service called Maven. (AP Photo/Paul Sancya)

The Pew Center asked people if they make money from the Internet or computing devices, and, if so, what they do to earn their pay. The answers provided the findings of Pew's new report on what has been called the "Gig Economy."

Pew found that income earned on the Internet can come in many forms. Many Americans said they used their computers to do extra work.

About five percent of Americans said they did online computer work over the last year. Some of these people said they had jobs that paid a few pennies each to take surveys. In these surveys, people are asked for their opinions of different products or well-known people.

Others typed reports or other information on their home computers.

Using digital devices to offer a service online was another way to earn income.

About two percent of Americans earned money from ride-sharing companies such as Uber and Lyft. When drivers are ready to pick up passengers, they use their ride-share company's app. The computer program lets them know when passengers are ready to be picked up and how to reach them.

Some people make their homes, apartments, or rooms inside their homes, available for money to people visiting their cities. A popular website people use to makes rooms available is www.airbnb.com.

Other people use apps on their computer devices that permit people to hire them to babysit, walk dogs or do repair or clean-up work. Apps operated from phones or tablets connect them to people looking for such services.

How Much Does Online Work Pay?

Only 16 percent believe doing online work will lead to a meaningful career.

But 37 percent say the extra income earned from online jobs helps them make up for shortages in money.

The number one reason people gave for taking online jobs was that the work gave them something to do and was fun. Pew said that reason was listed by 42 percent of people it questioned.

But, opinions about the online economy are mixed.

Sixty-eight percent say the gig economy is good for people who want flexibility when they work. Flexibility means they do not have to work when they are at their regular jobs or have family or school events or other things they want or need to do.

But, 23 percent say online work lets companies take advantage of employees and only 16 percent believe they can build careers with gig work. By taking advantage, some people mean they do not get paid enough for work done through online companies.

About one in five say they take online jobs to gain work experience, while 17 percent say it is because they cannot find other jobs.

What kind of people work online or use online devices to find work? The answer appears to be: mostly people who already have jobs.

We want to hear from you. Write to us in the Comments Section and share your views on 51VOA.COM. Have you ever used a computer or smart device to make money?

furniture - n. chairs, tables, beds, etc., that are used to make a room ready for use

tablet - n. a flat, rectangular computing device that is used for connecting to the Internet, watching videos, reading books

type - v. to write with a computer keyboard or typewriter

flexibility - adv. able to change or to do different things

advantage – n. turn something in a way that is helpful to one party over another -- such as the boss over his or her employee