Malala: Invest in Books, Not Bullets

Update Required To play the media you will need to either update your browser to a recent version or update your Flash plugin.
By Dr. Jill Robbins
15 July, 2015

Pakistani Malala Yousafzai is the youngest winner of the Nobel Peace Prize. On Sunday July 12, she celebrated her 18th birthday by opening a school in Lebanon. The school serves Syrian refugee girls in the Bekaa Valley.

Ms. Yousafzai has been an education activist for years and at great risk. In 2012, Taliban gunmen shot the 15 year-old school girl in the head. They said they did it because she supported education rights for females.

Ms. Yousafzai survived the attack and continued to fight for education. In 2014, she won the Nobel Peace Prize. 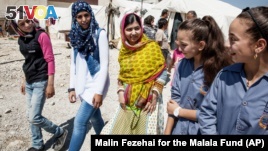 On Sunday, the activist spoke in a schoolroom surrounded by drawings of butterflies. She said people need to pay more attention to refugees from Syria.

"I decided to be in Lebanon because I believe that the voices of the Syrian refugees need to be heard and they have been ignored for so long."

"Today on my first day as an adult, on behalf of the world's children, I demand of leaders we must invest in books instead of bullets. Books, not bullets, will pave the path towards peace and prosperity."

The Malala Fund is a non-profit organization that supports local education projects. It paid for the school in the Bekaa Valley, close to the Syrian border. Up to 200 girls aged 14 to 18 can attend the school.

There are 1.2 million refugees from Syria's war in Lebanon. In all, four million people have fled to neighboring countries. There are about 500,000 Syrian children in Lebanon. Only about 100,000 of them are attending school.

Too little money for food aid to Syrian refugees

The U.N. also says the number of Syrian refugees in neighboring countries is growing. And the World Food Program, or WFP, does not have the financial support that governments said they would provide. Last month, the agency reported it had not received seventy-five percent of the money promised by several governments.

On July first, the WFP announced it would cut the amount given to Syrian refugees in Lebanon for food to about half of one dollar per person per day. In Jordan, most refugees live below the poverty line of $3.20 per day.

Ms. Yousafzai said that Jordan and Lebanon are barring some Syrian refugees from entering their countries. She called the situation inhuman and shameful.

The United Nations reports that pressure on host countries continues to grow. Some six million people are displaced in Syria and neighboring countries. It is becoming more difficult for Syrians to find a safe place in the area. So, more are planning even riskier trips. They attempt dangerous travel across the Mediterranean Sea to try to reach Europe. Many Syrians have died on these attempts.

Malala Yousafzai's father, Ziauddin Yousafzai, said he was proud that his daughter was continuing her activism as an adult.

"The mission she was carrying with her life when she was hardly an 11 years old in Swat Valley, when Taliban banned girls' education and they bombed many, many schools, she stood for her right. After [the] attack, that small event on a very small local level, it turned into a global campaign for education."

At the Malala Yousafzai All-Girls School, students sang Happy Birthday and gave Ms. Yousafzai a birthday cake. The warm welcome led to tears of joy. Ms. Yousafzai said the girls did not need advice from her.

Dr. Jill Robbins wrote this story for VOA Learning English based on a report from Reuters. Caty Weaver was the editor.

activist - n. a person who uses or supports strong actions (such as public protests) to help make changes in politics or society

on behalf of someone - as a representative of someone

pave (the way for) - v. to make it easier for something to happen or for someone to do something

displaced - adj. people who have been forced to leave the area/country where they live