Update Required To play the media you will need to either update your browser to a recent version or update your Flash plugin.
By Anna Matteo
16 November, 2015

A California man who was feeling sick almost died recently from a shocking cause.

26-year-old Luis Ortiz went to a hospital because of a headache and nausea. When doctors examined him, they were shocked to find a tapeworm larva in his brain. 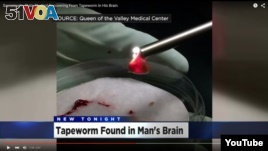 California man suffers from tapeworm in his brain. (Screen shot from CBS News via YouTube)

The story gets stranger. The larva was still alive.

The creature had caused a cyst to form inside his head. The cyst was restricting the flow of liquids to different areas of his brain. The situation was so serious that doctors said they had to perform an emergency operation to remove the larva.

The Associated Press reports that a doctor who operated on Ortiz told him he had only 30 minutes to live. The California man told ABC News that when the doctor pulled the worm out of his head, it was still moving.

Luis Ortiz was a student at California State University in Sacramento. He began experiencing headaches in late August, he told a local newspaper. But Ortiz said he did not think the headaches were serious.

In September, he visited a friend and his parents in another city. That is when the pain got worse. His mother reportedly saw Ortiz throwing up. She took him to a hospital emergency room.

Ortiz told ABC News that he was "shocked." He said he "couldn't believe something like that would happen" to him. He said he did not know there was a parasite trying to ruin his life.

The doctors saved Ortiz's life. However, the surgery also affected it. According to ABC News, Ortiz had to drop out of school and move back home. It said, for now, he is not permitted to work or drive a vehicle.

Tapeworms and other parasitic worms usually infect a person's intestinal system. In rare cases, they infect the brain.

Doctors suspect Ortiz ate something containing the tapeworm. You can get a tapeworm from food that is unclean, and contaminated with tapeworm eggs. People can get them from eating infected, undercooked or uncooked pork. Another type of tapeworm can infect beef.

The U.S. Centers for Disease Control and Prevention says the U.S. has about 1,000 reported cases of tapeworms each year. The CDC adds that tapeworms are more common in developing countries with poor public health systems.

According to CDC officials, signs of infection with a parasitic worm include stomach pain, nausea, loss of appetite and weight loss. Others signs are a lasting headache and vomiting.

The best way to avoid a tapeworm infection is to wash fruits and vegetables. Also, make sure meat is cooked thoroughly. The CDC suggests cooking all meats to an internal temperature of at least 63 degrees Celsius.

Separately, the CDC says tapeworms could spread cancer. This comes after studying the case of a Colombian man who died after "catching" the disease from a tapeworm that had infected him.

In the Comments section practice using words such as "appetite," "nausea" and "contaminate."

Anna Matteo wrote this piece for Learning English based on reports from VOA News, ABC, USAToday and CBS. George Grow was the editor.

nausea – n. the feeling you have in your stomach when you think you are going to vomit

cyst – n. a growth filled with liquid that forms in or on your body

contaminate – v. to make (something) dangerous, dirty, or impure by adding something harmful or undesirable to it : contaminated – adj.

intestine ­­– n. a long tube in the body that helps digest food after it leaves the stomach intestinal – adj.