Update Required To play the media you will need to either update your browser to a recent version or update your Flash plugin.
By Greg Stachel
12 October 2022

The government said the taxes would be a world's first. They said that farmers should be able to get the money back by charging more for climate-friendly products.

But farmers quickly criticized the plan. 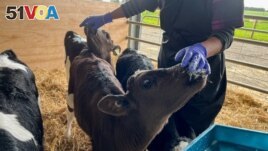 Calves are fed a probiotic supplement called "Kowbucha," which has been shown to reduce the methane that they produce, as part of a trial at a Massey University's research farm in Palmerston North, New Zealand, September 7, 2022. (REUTERS/Lucy Craymer)

Federated Farmers is the industry's main political support group. It said the plan would "rip the guts out of small-town New Zealand" and see farms replaced with trees.

Andrew Hoggard, the group's president, said farmers had been trying to work with the government for more than two years. They were working on a plan to reduce greenhouse gas production that would not decrease food production. Hoggard said, "Our plan was to keep farmers farming." But, with the taxes, he said, farmers would be quickly selling their farms.

The conservative ACT Party is the main opposition group. Members of the party said the plan would increase worldwide greenhouse gas production by moving farming to other countries that were less efficient at making food.

New Zealand's farming industry is very important for its economy. Milk products, including those used to make milk for baby food in China, are the nation's largest export earner.

There are just 5 million people in New Zealand. But the country has some 26 million sheep and 10 million farm animals producing milk and meat.

About half of New Zealand's greenhouse gas comes from farms. Farm animals produce gasses that warm the planet like methane and nitrous oxide from burping and urinating.

Prime Minister Jacinda Ardern said all the money collected from the proposed tax would be put back into the industry. It would support new technology, research, and payments for farmers.

Agriculture Minister Damien O'Connor said New Zealand farmers were already experiencing the impact of climate change with periods of dry weather and flooding. "Taking the lead on agricultural emissions is both good for the environment and our economy," he said.

The proposal is similar to another unsuccessful proposal made in 2003 to tax farm animals for their methane production. Back then, farmers greatly opposed the idea and political opponents criticized it. And the government dropped the plan.

The debate in New Zealand is part of a larger international discussion on the effects of farming on the environment and the steps some say are needed to reduce its impact.

In the European nation of the Netherlands, farmers have blocked large, busy roads with farming products and vehicles. They did so to protest government proposals to decrease the production of greenhouse gases.

greenhouse gas - n. gas that cause the warming of the earth's atmosphere

burp - v. to let out air from the stomach through the mouth with a sound

urinate --– v. to send urine out of the body

rip the guts out of – phr. v. to hurt someone or something in the worst possible way