Update Required To play the media you will need to either update your browser to a recent version or update your Flash plugin.
By Gregory Stachel
09 October 2022


Europeans are preparing for the increase in prices of their energy bills. Many plan to try to save energy this winter by turning down the heat and turning off lights.

But not the 130 people who live in the east German village of Feldheim.

The little town has been energy self-sufficient for more than ten years. 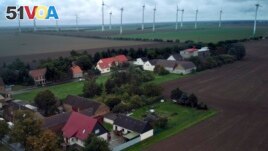 Feldheim built a few wind turbines to provide it electricity as an experiment in the 1990s. Then, the village expanded that effort to build a local electrical system, or a grid, and solar panels, batteries, and more turbines.

A biogas factory built to keep piglets warm was enlarged. It pumps hot water though a village-wide central heating system. A hydrogen production center is also being built.

Now, 55 wind turbines can be seen (and not heard) on the farmlands around Feldheim. Locals enjoy some of the lowest electricity and natural gas prices in Germany.

Kathleen Thompson works for a local educational organization, the New Energies Forum. The villagers "can all sleep well at night," she said. "They've got no concerns because the prices are not going to change, not in the immediate future anyway."

Thousands of visitors from around the world come to see how Feldheim produces green energy. Germany, as a whole, still uses carbon-based fuel for much of its energy needs.

But the country has invested billions into the growth of renewable energy to reduce its use of climate-changing energy. Even with that investment, carbon-based fuels and nuclear energy were responsible for more than half of the country's total power production in the first six months of 2022.

A lack of sufficient transmission capacity often leads to shutdowns at wind parks. Carbon-based fuel plants then increase their production to provide electricity to factories in the south.

Michael Knape is mayor of Treuenbrietzen, the city to which Feldheim belongs. He said letting locals take part in and benefit from the project was key to Feldheim's success.

The community approved so many turbines that it makes, and exports, about 250 times more electricity than it uses.

Knape admitted that Feldheim's effort cannot be copied everywhere. But he said such projects could be a big part of a solution.

"Many little Feldheims could supply at least parts of Berlin," he said.

solar panel --– n. a large, flat piece of equipment that uses the sun's light or heat to create electricity

transmission – n. the act or process of sending electrical signals to a radio, television, or computer

capacity – n. the amount of something that can be produced or managed by a factory or company