Update Required To play the media you will need to either update your browser to a recent version or update your Flash plugin.
By Andrew Smith
04 October 2022


Palestinian parents in East Jerusalem are protesting books that Israeli officials require schools to use.

The Palestinians say that the textbooks have been censored by the Israelis. They say the books are important to their history, religion, and heritage and should not be changed. But Israeli officials say the textbooks contained material that could incite violence.

Recently, protesters gave out copies of the uncensored textbooks outside of a school in East Jerusalem. In mid-September, Palestinian protesters led a one-day strike. Many parents demonstrated, carrying banners with slogans including: "No to the Israelization of education". 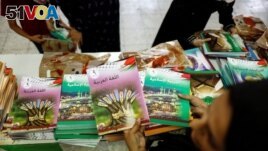 Palestinians shared examples of the changes made by Israeli censors on social media. One change removed part of an Arabic poem that talked about an Israeli security checkpoint. Another change removed information about treaties that divided the Middle East in the past. And a third removed an image of a key, which is the symbol of Palestinian refugees.

But Israeli officials gave their own examples. The officials said they changed an exercise asking children to name Palestinians held in "the occupation's prisons" to one that asks them to name the bird that is a sign of peace. Another change removed words accusing Israel of destroying Palestinians' heritage and stealing art works. The textbook also contained a map that did not include the word Israel.

In July, Israeli officials wanted to take away the licenses of six schools. The officials said they had given the schools one year to use an approved version of the Palestinian Authority's curriculum.

A city official said Israelis offered the schools a choice of using the Israeli curriculum, but Palestinians disagree.

A 2016 report by the Palestinian Academic Society for the Study of International Affairs commented on the issue. It said Israeli officials have used financial incentives to pressure East Jerusalem schools to teach the Israeli curriculum.

Israel captured East Jerusalem in 1967 and later annexed it. The move was not internationally recognized.

It is estimated that Palestinians make up 38 percent of Jerusalem's population. Five percent of them are Israeli citizens. Palestinians consider East Jerusalem the capital of a future Palestinian state that would include the occupied West Bank and Gaza Strip.

Parents and teachers have mostly blocked attempts to use Israeli-approved teaching materials in East Jerusalem. That part of the city began using a Palestinian curriculum in the 1990s.

Reuters reports that a city official said 15 percent of East Jerusalem's student population is taught the Israeli curriculum. He said 10 years ago, it was three percent.

Tareq Akash is a parent who worries about that increase. He fears people may no longer remember the displacement of hundreds of thousands of Palestinians in the 1948 war that led to the creation of Israel.

"We will not allow the brainwashing of our children," he said at last Monday's demonstration.

censor –v. to examine books, movies and other media in an effort to remove things that are considered wrong or unacceptable

heritage –n. the history and culture of a family, community, or country

slogan –n. a short phrase, usually easy to remember, used by political parties or other organizations or in advertisements

checkpoint –n. a location where police or military forces control or limit the movement of people from one area to another

key –n. a device used to open a lock

license –n. an official document that gives the holder permission to do, use or have something

curriculum –n. the subjects and material taught in schools

incentive –n. something that is used to increase the motivation to do something, often as a reward

annex –v. to add an area to a country; to take control of another territory

displacement –n. the movement or removal of things or persons from one place to another

brainwashing –n. to cause someone to believe something by using methods that make the person unable to think normally