Update Required To play the media you will need to either update your browser to a recent version or update your Flash plugin.
By Dan Friedell
30 September 2022


As cold weather comes to Europe this autumn, energy prices are rising. A main reason for the cost increase is Russia's war with Ukraine.

Russia has been a main supplier of oil and natural gas for many European countries. Supplies have been limited because of the war and financial restrictions meant to punish Russia. As a result, home and business owners from Bulgaria to Spain are worried about the cost of energy in the coming months.

German leader Olaf Scholz said his country prepared during the summer so that it can go "bravely and courageously into this winter." 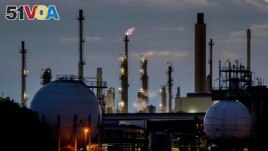 Scholz said no one could have made the same statement earlier this year.

In Paris, a decision to reduce energy use means the lights on the Eiffel Tower will turn off one hour earlier than normal. Also, businesses and restaurants that kept their lights on even when they were closed will now turn off their lights at night.

Here are some other measures concerned business owners around Europe are taking to save money:

A Hamburger seller in Hungary

In Hungary, Richard Kovacs manages business for a group of hamburger restaurants called Zing Burger. He said the restaurants are already heating their cooking surfaces, or grills, less often and making sure lights are off in little-used storage areas. Some of the restaurants have seen a 750 percent increase in electricity costs since the beginning of the year.

He said the restaurants cannot do much more to lower their costs.

"We can't turn off the lights and make our guests sit in the dark," he said.

A fruit grower in the Netherlands

In the Netherlands, some businesses are "in survival mode." They are doing everything they can because they do not want to lose the customers they have worked so hard for.

He said he needs to keep selling his produce because he does not want to "ruin the reputation" his family made over so many years.

A baker in Germany

Andreas Schmitt is a baker who owns 25 stores in Frankfurt, Germany. He said he is not heating as many ovens as before and not making as many different products. He said he is reducing his energy use between five and 10 percent. However, his energy costs will still rise from about $300,000 this year to over $1 million next year.

A small change to his energy use, he said "is not going to shift the world."

Schmitt leads the local baker's industry group. He said some smaller business owners are thinking about giving up.

He hopes the German government will give small bakers some money so they can stay in business this winter. Over the long term, he said, energy markets need to be changed.

Bruegel, a research business in Belgium, is looking at both short-term and long-term solutions. In the coming months, the company said, some European governments plan to help pay for people's energy costs. They also plan to help energy companies buy more gas so they can meet demand.

Some nations are changing their gas suppliers. Instead of buying gas from Russia, they are getting gas from Norway, Azerbaijan and buying liquefied gas that comes by boat from the United States.

They also are considering raising taxes on energy companies that are making money from higher energy prices. And they are thinking of ways to control electricity markets so natural gas prices do not affect them so much.

However, European Union officials believe the way to get out of the current situation is to increase the use of renewable energy. That is power that comes from wind, water and the sun.

In Madrid, Spain, some people are installing solar panels. Manuel Ruiz said he and the other people who live close to him are now reducing their use of gas by 40 percent.

While European governments are going away from Russia as an energy provider, it is not easy to give it up completely.

One energy policy expert who looks at Eastern Europe is Agata Loskot-Strachota. She is based in Warsaw, Poland.

Because Russia is still supplying some gas, Loskot-Strachota said, the country's leader, Vladimir Putin, still has power over Europe. The threat of Russia completely cutting off its supply has some people worried that those currently supporting Ukraine will change their minds. There have already been energy-related protests in Belgium and the Czech Republic.

"Every molecule counts," Loskot-Strachota said. She called the flow of gas "leverage," and noted that an energy crisis could send some European countries into poverty.

Bulgaria is one of those countries. It is the poorest member of the European Union. Right now, the cost of fuel, such as firewood, is going up. People are reducing their spending now to be sure they have money to pay for heat and medicine over the winter.

Gregor Iliev is 68 and retired. He lives in a small apartment in Sofia, Bulgaria with his wife. When price increases were announced for their old heating system, the two decided to buy a new one. The new system provides heat in the winter and cools their home in the summer. It is costly, but Iliev said they will make their money back "in the long run."

In Budapest and Prague, people who own restaurants and bakeries say they have done everything possible to cut costs. The next thing is to raise prices.

Eszter Roboz runs a bakery in Budapest. She raised prices by 10 percent and said if prices remain stable from now on, she can stay in business. But she is worried about what will happen if they continue to go up.

"We will really need to think about whether we can continue this," she said.

courageously –adv. done in a brave way that shows courage

guest –n. people who are invited to stay with someone; customers

mode –n. a way of doing things or of behaving

reputation –n. the common opinion that people have about someone

install –v. to make a machine ready for use

leverage –n. influence or power that can be used to get a result

stable –adj. not changing sharply; in a good state that is not easily changed