Officials: More Migrants Caught at US Border Than at Any Time Since 2000

Update Required To play the media you will need to either update your browser to a recent version or update your Flash plugin.
By Dan Friedell
05 April 2021


United States officials caught 171,000 people trying to illegally cross the U.S. border with Mexico last month. That is 178 percent more than in February.

Most of the people are trying to escape difficult conditions in Central America and Mexico.

The Reuters news agency reports that more people tried to cross the border in March than at any time in the last 20 years.

About 99,000 of the total were single adults. The rest included almost 19,000 children traveling alone and about 53,000 family members traveling together.

Children who arrive at the U.S. border alone are not sent back immediately. They are housed in "processing centers." However, the centers are designed for many fewer people and now are overcrowded.

As a result, the U.S. government opened emergency shelters in Dallas, Texas and San Diego, California. But those are also getting full. 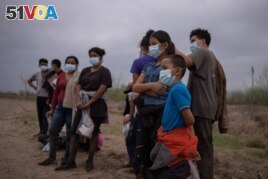 FILE - About a dozen asylum seeking unaccompanied minors from Central America are separated from other migrants by U.S. Border Patrol agents after crossing the Rio Grande river into the United States from Mexico on a raft in Penitas, Texas, U.S., March 14, 2021.

President Joe Biden has said the "vast majority" of families who arrive together at the border are being sent back. However, information from U.S. Customs and Border Protection shows that might not be the case. More than half of the 19,000 people who arrived as part of family groups were not sent back in February. Many were released into the U.S. and were required to appear at an immigration court at a later time.

Reuters also looked at documents from three separate days in March that showed fewer than 14 to 16 percent of family members were sent home on those days.

Sarah Peck is a spokeswoman from the U.S. Department of Homeland security. She said, "one day or week of statistics doesn't reflect the full picture."

She added that it is still the government's policy to send families away. However, Mexico, the country from which the migrants entered the U.S., is not always able to receive them. So they are sent to an immigration court.

Ted Hesson wrote this story for Reuters. Dan Friedell adapted it for Learning English. Mario Ritter, Jr. was the editor.

How should the U.S. manage the people coming to the border? Tell us in the Comments Section and visit 51VOA.COM.

statistics -–n.(often pl.) a number that provides information about how many, how often or how common something is