Update Required To play the media you will need to either update your browser to a recent version or update your Flash plugin.
By Bryan Lynn
31 March 2021


German carmaker Volkswagen says a widely publicized announcement that it was changing its name to "Voltswagen" was meant as a joke.

A volt is a measurement of force in an electrical current. 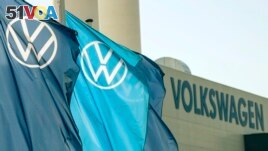 Flags wave in front of a factory building during the production restart of the plant of the German manufacturer Volkswagen AG (VW) in Zwickau, Germany, Thursday, April 23, 2020.

The German company admitted it had put out a false news release Tuesday announcing that the name of its U.S. branch was being changed to "Voltswagen of America." It said the release was created to publicize a new vehicle in a fun way. The announcement said Volkswagen was launching its all-electric ID.4 sport utility vehicle (SUV).

In a tweet published Tuesday, the company said: "We know, 66 is an unusual age to change your name, but we've always been young at heart. Introducing Voltswagen. Similar to Volkswagen, but with a renewed focus on electric driving."

Many major news organizations, including The Associated Press, Reuters, USA Today, CNBC and The Washington Post, reported the press release as real news. Some, including the AP, said they had been promised by Volkswagen that the news release was not a joke.

"The Associated Press was repeatedly assured by Volkswagen that its U.S. (branch) planned a name change, and reported that information, which we now know to be false," AP spokeswoman Lauren Easton said.

The news service corrected its earlier story and published a new one based on the company's admission. Easton added that any purposeful release of false information "hurts accurate journalism and the public good."

Other news organizations were also forced to publish new stories with corrected information after Volkswagen's admission.

A spokeswoman for USA Today, Chrissy Terrell, said its reporter asked if the company's news release was a joke and was told "no." She said the false announcement was used as a way "to manipulate respected reporters" from trusted news organizations.

The USA Today business reporter himself, Nathan Bomey, wrote on Twitter: "Dear Volkswagen: You lied to me. You lied to AP, CNBC, Reuters and various trade pubs. This was not a joke. It was deception." He added that the U.S. already has a problem with misinformation and told the company: "Now you're part of it. Why should anyone trust you again?"

Early Tuesday, Volkswagen supported the story and re-released the news. But by late Tuesday, the company had removed the news from its website.

"Volkswagen of America will not be changing its name to Voltswagen. The renaming was designed to be an announcement in the spirit of April Fool's Day," the statement said. April Fool's Day, observed by people in some countries on April 1, is a day to play tricks on others or attempt to fool them.

A spokesman for Volkswagen in Germany told The Wall Street Journal that "we didn't mean to mislead anyone. The whole thing is just a marketing action to get people talking" about the new ID.4 SUV.

Some critics spoke about Volkswagen's industry scandal that greatly hurt it in the past. The company was forced to admit in 2015 that some of its cars were equipped with devices that cheated on diesel emissions tests.

Dawn Kopecki, a senior editor for CNBC.com, noted the scandal on Twitter. She tweeted, "Apparently no one in the approval process at @VW said, hey maybe we shouldn't lie to the press given the whole, you know, emissions lying thing."

sport utility vehicle (SUV) – n. usually a large vehicle that can drive on simple roads and is meant to be used for recreational purposes as well as general ones

focus – n. the subject on which people place their attention; a main point of interest

assure – v. to tell someone in a very clear way that something will happen or is true

manipulate – v. to deal with something in a clever and usually unfair or selfish way

deception – n. to make someone believe something that is not true

scandal – n. an incident that shocks or makes people upset because it is morally or legally wrong

emissions – n. things (usually gasses) that are released from a process