Update Required To play the media you will need to either update your browser to a recent version or update your Flash plugin.
By Susan Shand
30 March 2021


Leaders of 23 countries and the World Health Organization (WHO) on Tuesday supported an idea to create an international treaty for health emergencies. The treaty would strengthen rules on sharing information.

The idea of such a treaty was first suggested by President of the European Council Charles Michel at a meeting of the Group of 20 major economic powers last November. The treaty would try to ensure that every country would have an equal ability to get vaccines, medicine and needed equipment for widespread health crises. 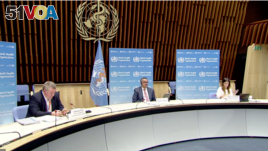 Diplomats say WHO Director-General Tedros Adhanom Ghebreyesus has agreed with the idea, but official talks have not begun.

Tedros told a news conference on Tuesday that a treaty would solve the problems that many countries experienced after COVID-19 first appeared. He said the first written attempt at a resolution on negotiations could be presented to the WHO's 194 member states at their yearly meeting in May.

On Tuesday, the treaty proposal got the support of the leaders of Fiji, Portugal, Romania, Britain, Rwanda, Kenya, France, Germany, Greece, South Korea, Chile, Costa Rica, Albania and South Africa. Leaders of Trinidad and Tobago, the Netherlands, Tunisia, Senegal, Spain, Norway, Serbia, Indonesia, Ukraine and the WHO itself also offered their support.

"There will be other pandemics and other major health emergencies. No single government or multilateral agency can address this threat alone," the leaders wrote in a joint statement in several large newspapers.

"We believe that nations should work together towards a new international treaty for pandemic preparedness and response," it said.

The leaders of China and the United States did not sign the statement. However, Tedros said both countries had been supportive of the idea of a treaty. He also said all countries would be represented in talks.

The treaty would work with the WHO's International Health Regulations. They are rules that have been in force since 2005. Nations would work together to control supplies, share virus samples, research and development, the WHO's assistant director said.

The Reuters News Agency reported this story. Susan Shand adapted it for Learning English. was the editor.

origins – n. (often pl.) the point or place where something begins or is created

address – v. to give attention to something; to deal with something

response – v. something done that is a reaction to something else; an answer or reply

sample –n. a small amount of something that is used to give information about what it was taken from