Students in Parkland, Florida returned to their high school on Wednesday, two weeks after a gunman killed 17 people there. A former Stoneman Douglas student, Nikolas Cruz, carried out the attack. 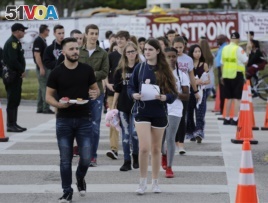 However, some students said they felt less secure seeing officers carrying AR-15s, the same rifle used in the attack February 14.

Student David Hogg said "This is a picture of education in fear in this country. The NRA wants more people just like this, with that exact firearm to scare more people and sell more guns."

Hogg has become an activist in a nationwide student movement for gun law reform, including a ban on semi-automatic guns.

Preparing for the return

Grief counselors also are deployed at the school. Broward County school official Robert Runcie said the workers were called in to help students "ease back" into their school life.

Volunteers passed out cookies and other treats to students. Comfort animals including dogs, a donkey, and two horses are also available at the school.

Officials have barred the use of backpacks for now.

The school day schedule was changed for the first day. Students returned to the classes they were in when the attack began.

The building where most of the shooting happened remains closed.

Student Casey Sherman thinks the schedule change was a good idea to help kids, in her words, "get it over with." The 17-year-old said she is not afraid to be returning, just worried.

Sherman is among the student activists preparing to protest March 14 in a national school walkout to stop gun violence.

Some students remain severely injured from the shooting, both physically and psychologically.

Alexis Grogan is a 15-year-old in the 10th grade. She said it might be too soon to continue normal school life without her friends who were killed. But she said the activism of the Parkland students is helpful.

She added, "I am so proud of how the kids at my school have been fighting because we all want change to happen and, as we see the progression, it really shows us that people do care and they do hear what we have to say."

The Associated Press reported this story. Phil Dierking adapted it for VOA Learning English. Caty Weaver was the editor.

grief counselor - n. a health professional that aims to help people cope with saddnes and mourning following the death of loved ones, or with major life changes that trigger feelings of saddness.

backpack - n. a bag for carrying things that has two shoulder straps and is carried on the back

comfort - n. a state or situation in which you are relaxed and do not have any physically unpleasant feelings caused by pain, heat, cold, etc.

cookie - n. a sweet baked food that is usually small, flat, and round and is made from flour and sugar

NRA - n. The National Rifle Association, or NRA, is an organization that is active in supporting the rights of U.S. citizens to own guns.

semi-automatic - adj. able to fire bullets one after the other quickly but not automatically