Update Required To play the media you will need to either update your browser to a recent version or update your Flash plugin.
By Dan Friedell
27 May 2022


High energy prices and rising food costs mean that people around the world are seeking help with everyday expenses. In Britain, many are turning to places known as food banks to help them be able to eat something healthy each week.

Food banks receive donations from food stores and from individuals who have more than they need. The food banks then pass along items such as bread, milk and vegetables to people who do not have enough to eat.

Some food banks also make meals of their own. 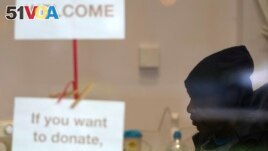 Dave sits at the Community Food Hub in London. He is one of a large number of people who do not have enough to eat across Great Britain. (AP Photo/Frank Augstein)

Food banks are important because restaurants and food stores are passing on their higher costs to buyers. But people are having trouble buying food because their earnings are not rising at the same rate as the cost of goods.

In Britain, financial experts think prices will continue to rise. International Monetary Fund experts believe Britain's economy will grow the slowest among the developed nations in the Group of Seven. The group also includes the United States, Canada, France, Germany, Italy, and Japan.

Economists say the war in Ukraine is one reason for the fast price increases. The leader of the Bank of England recently said prices could be 10 percent higher by the autumn than they were a year before. Andrew Bailey, the bank's governor, used words such as "shock" and "apocalyptic" to describe the price increases.

Michelle Dornelly is one person who is trying to help people deal with the cost increases. She runs a food hub in a poor part of East London called Hackney.

She gets extra food from food stores and gives it to people who do not have enough. She also makes meals, such as spicy turkey, for people who are hungry.

She said the demand for food has gone up as prices have risen. She used to have enough to keep the hub open until 4 in the afternoon. Now she runs out by 2:30.

She said some people feel "panic."

Rachel Ledwith works for a charity in London that moves extra food to about 1,000 organizations like Dornelly's food hub. She said the group, called the Felix Project, delivered enough food to make 30 million meals in 2021. However, she said, "there's still a huge amount of need out there in London."

Prices in Great Britain are rising quickly. In April, inflation hit 9 percent, the highest in 40 years. At the same time, energy costs increased by over 50 percent. The country's energy costs could go up by the same amount again in the autumn.

Dave Anderson is one person who goes to the food bank. He said he expected prices to rise but he called the current situation "drastic."

He recently had heart surgery and has not been able to work. He gets about $145 from the government every two weeks but that amount does not cover all of his bills.

He said he does not understand why government leaders are letting people suffer.

"I've not even looked at my bills because I think I'd want to sit there and cry," he said.

A group that runs more than half of the food banks in the country said last winter was one of its busiest ever. The Trussell Trust said its food banks provided 14 percent more in the past year compared to the same time in 2019.

Another organization, The Food Foundation, said recent research showed one in seven British adults had eaten less than usual, skipped meals or gone hungry because they could not pay for food.

Anne Taylor leads The Food Foundation. She said the problem in Great Britain is becoming a health crisis.

"The government needs to realize," she said, "the boat is sinking for many families and it needs to be fixed."

Prime Minister Boris Johnson's government has been criticized for not adding new financial support to its latest budget.

Dornelly said the problem will feel worse in the summer, when children are out of school.

"What happens ... when you've got five screaming children at home?" she asked. "What are you going to do when the gas and electric runs out and you have no food?"

expenses – n. the amount of money that must be spent regularly to pay for something

shock – adj. something surprising and upsetting

apocalyptic- adj. something that feels like the end of the world

charity- n. an organization that helps people for no cost

skip- v. to go without or to miss something you usually have

scream- v. to cry out in a loud voice