Some Fear Digital Surveillance of Pregnancy

Update Required To play the media you will need to either update your browser to a recent version or update your Flash plugin.
By Dan Novak
23 May 2022


Companies that collect data from people online often know their most sensitive health information. They can find that information through web searches and tracking programs.

Privacy experts now fear this information could be used to spy on pregnant women if the U.S. Supreme Court overturns Roe v. Wade – the court's 1973 ruling protecting the right to end a pregnancy.

For now, the data is mostly used to target advertising, like baby products shown to pregnant women. But the information could become evidence in a criminal case. And it is something that worries those who support a woman's right to end a pregnancy, or abortion. 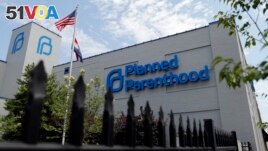 "The value of these tools for law enforcement is for how they really get to peek into the soul," said Cynthia Conti-Cook. She is a Ford Foundation technology expert.

In public, there are security cameras, license plate readers and other tools to record people's movements. And the technology has gotten far ahead of the laws that govern them. Laws in the U.S. are far behind those passed in Europe in 2018.

Vice News found that until this month, anyone could get data on clients at more than 600 Planned Parenthood offices around the country for as little as $160. Planned Parenthood is a non-profit provider of healthcare including abortions.

The information included probable patient addresses, earning levels, time spent at the health provider, and the top places people visited before and afterward.

That is possible because the current law protects privacy in the doctor's office but not information that mobile devices and tech companies collect. Some American states are starting to push back, setting limits on tools that gather this information.

The state of Massachusetts, through a legal settlement, stopped a Boston company from sending anti-abortion advertising to women inside health offices that offer abortion services.

In Michigan, voters changed the state constitution to require police to get a warrant before searching someone's data. And in California, voters passed a digital privacy law that lets people delete the data that companies collect about them.

Still, the responsibility to protect one's privacy lies mainly with the user who must understand complex data agreements and policies.

The rising concerns have forced Apple, Google and other tech companies to add measures limiting the sale of consumer data. That includes Apple's launch of its App Tracking Transparency feature, which lets users block apps from tracking them.

Abortion rights activists suggest that people in conservative states leave their phones at home or turn off location services when seeking health care. They also advise studying the privacy policies of health apps they use.

Nathan Freed Wessler is with the ACLU's Speech, Privacy, and Technology Project. He said there are "very, very few people who have the savvy to do everything" needed to protect themselves.

track — v. to follow or watch the path of

peek — v. to look at someone or something secretly especially from a hidden place

warrant — n. a document issued by a court that gives the police the power to do something

savvy — adj. having practical understanding or knowledge of something