Update Required To play the media you will need to either update your browser to a recent version or update your Flash plugin.
By VOA
30 December, 2015


Technology related to the Internet continued to speed ahead in 2015. With so many products and apps, here's what we thought were the hottest trends.

Periscope broadcasts around the world 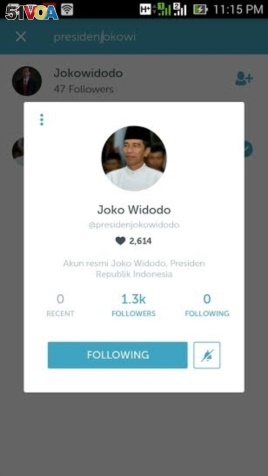 Twitter brought us live-streaming video this year. The Periscope app was launched on Twitter's social media site in March. Periscope showed what people were doing at the moment. It was also used by news outlets to report breaking, or happening, news on location. Companies used Periscope, as well, to talk about their commercial products.

The people who watch live streaming on Periscope can make comments or write a note that is seen on the Periscope screen. A map shows where people are broadcasting from.

You can broadcast stories with Periscope anywhere there is an Internet connection.

Started in April 2015, Blab broadcasts conversations of two, three or four people on its website. Sign up for the video service with Twitter and watch people talk about all kinds of subjects.

Blab conversations include science, cooking, news, TV shows or other subjects. You can make comments and ask questions.

You can launch a Blab conversation as long as you have another person to join in. You might be asked to join an existing conversation.

Tech that you wear -- like a bracelet that measures breathing, heart rate or the number of steps you've walked ?continued to be popular.

However, the company Nike ?a giant in sports clothing and gear -- gave up on wearable technology in 2015. It stopped selling its FuelBand fitness tracker.

Another company, Pebble, offered two smart watches in 2015. The first, Pebble Time, broke records on the crowd-funding site Kickstarter in March. It raised the most money ever for a project.

Pebble Time shipped in June 2015. It works with both Android and iPhone.

The Apple Watch was released in April. The watch connects to an iPhone to provide notifications, make and receive phone calls and text messages, and tell time.

The watch also works as a fitness tracker and has apps to control music, get stock prices and more.

In June, Apple launched its streaming music service, Apple Music. The service is free for three months. After that, users can still listen to the music for free, but with advertisements. To avoid ads, Apple offers monthly paid memberships.

Apple Music is available in more than 100 countries.

The streaming service has more than 30 million songs, and it works with iTunes. Apple Music has had some issues with controls and playing back music. Updates to Apple Music solved some of these issues.

Apple Music is available on iPhone, iPad and Android.

Spotify is a service available in 64 countries on the Internet. It plays music, much like a radio station, through an iPhone, Android phone, or computer using Spotify's website. You also can download the Spotify player.

Spotify's Year in Music 2015 shows which artist was streamed the most (Drake), who had the most streams in a single day (Justin Bieber), and the Most Streamed Song of 2015: Lean On (featuring M?and DJ Snake) by Major Lazer.

Listen to the Top 100 Tracks of 2015 Global to hear the most popular songs around the world this year on Spotify.

The power of your voice

The quality of voice assistance improved this year. Speaking a command to your phone is quicker and easier than typing in commands.

Some things you can do with your voice are search the Internet, get directions, find a place to eat, find a nearby movie or control the lighting in your home.

And people with physical disabilities are greatly helped by voice assistance.

Some of the popular voice assistants are named Siri, Alexa, Cortana and Google Now. 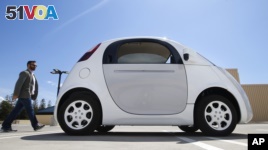 In this May 13, 2015 photo, a reporter walks toward Google's new self-driving car at the Google campus in Mountain View, California. (AP Photo/Tony Avelar)

A company called Best Mile announced this year that it is making final preparations to operate buses that drive themselves. It plans to offer this service in Switzerland next spring. These buses will hold up to nine people who are brave enough to ride in a bus without a driver.

Both Microsoft and Apple introduced new large tablets designed to replace laptop computers. Both tablets have a stylus and keyboard.

Microsoft started selling the Surface Pro 4 tablet with a 31-cm screen two months ago. The Surface Pro 4 runs Windows 10, the same operating system as a computer, making this tablet a true replacement of the computer.

The stylus and keyboard are included with the Surface Pro 4.

Apple introduced its biggest iPad ever in October, launching the iPad Pro with a 33-cm screen. Unlike the Surface Pro, the iPad Pro uses iOS, Apple's mobile operating system. It requires apps to work.

A stylus, called the Apple Pencil, and a keyboard are available, but not included with the iPad Pro.

One way tech did not change was with continuing data breaches. Companies and government agencies around the world had records stolen, allowing hackers access to personal and financial information.

Many companies and other organizations had data stolen in 2015.

And that's a look back at the year in personal technology.

streaming adj. playing continuously as data is sent to a computer over the Internet

smart adj. controlled by computers and able to do things that seem intelligent

notification n. something that gives official information to someone

battery n. a device that is placed inside a machine (such as a clock, toy, or car) to supply it with electricity

introduce v. to make (something) available for sale for the first time

fund v. to provide money for (something)

autopilot - n. a device that steers a ship, aircraft, or spacecraft in place of a person

laptop n. a small computer that is designed to be easily carried

stylus n. a small tool that is used to write or touch buttons on a computer

keyboard n. the set of keys that are used for a computer or typewriter

mobile adj. of or relating to cellular phones, handheld computers, and similar technology.

data breach n. the unauthorized or illegal viewing, access or retrieval of data by an individual