Update Required To play the media you will need to either update your browser to a recent version or update your Flash plugin.
By Christopher Jones-Cruise
29 November, 2016


At least 76 people were killed when an airplane carrying a Brazilian football team crashed Monday night in Colombia.

A Colombian police commander said five of the 81 people on the chartered plane survived. The aircraft was carrying 72 passengers and nine crew members.

The team was on its way to play in the final of the Copa Sudamericana football competition at the time of the crash. The sport is called soccer in the United States. 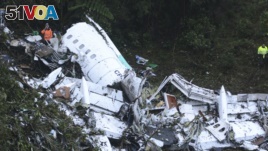 Rescue workers at the wreckage of an airplane that was carrying the Brazilian soccer club Chapecoense when it crashed outside Medellin, Colombia, Nov. 29, 2016.

The plane came down in a mountainous area near the city of Medellin. The flight had started in Bolivia.

The aircraft's owner was identified as LaMia, a small Venezuelan airline company. Officials said the plane, a British Aerospace 146, was designed for short flights. The crew reported an electrical failure and declared an emergency at 2200 hours local time (0300 GMT).

Colombian officials are investigating what happened. The head of the country's civil aviation agency said he cannot rule out the possibility that the plane used up all its fuel before the crash.

The plane was carrying the Chapecoense football team, from the small city of Chapeco in southern Brazil. Chapecoense was to have played Wednesday in the first of a two-game Copa Sudamericana final against Atletico Nacional of Medellin.

The mayor of Chapeco said he and other officials just missed joining the team and reporters on the flight to Colombia. They instead decided to take a commercial airline flight.

VOANews.com and the Associated Press reported this story. Christopher Jones-Cruise adapted the information for Learning English. George Grow was the editor.

chartered – adj. hired for temporary use; a charter flight is one that is arranged for a specific use by a team or group and is not a regularly-scheduled flight.

mayor – n. the top official of a city, town of village

commercial – adj. of or related to business