Polio Is Back in Nigeria

Update Required To play the media you will need to either update your browser to a recent version or update your Flash plugin.
By Bruce Alpert
17 August, 2016


Nigerian officials have launched a polio vaccination campaign in the country's northeast, where two new cases of the virus were found.

Health officials say the virus was discovered in two children from Borno State. The discovery came days before what was supposed to be a major anniversary -- two years without a case of polio in Africa's most populous country.

That would have left only one year before Nigeria and the rest of Africa would have been declared to be polio-free. 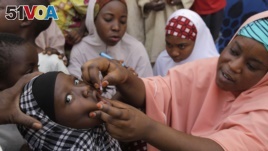 In this 2014 file photo, a health official administers a polio vaccine to a child in Kawo Kano, Nigeria. Nigeria has reported the first two cases of polio after more than two years, both in an area where Islamic extremists attacked polio vaccinators in the past. AP Photo/ Sunday Alamba)

John Vertefeuille is director of the polio program at the U.S. Centers for Disease Control and Prevention in the U.S. He said the discovery is "disappointing," adding that the two new cases will require a massive vaccination effort.

According to Nigerian officials, a boy, aged 15 months, and a two-year-old girl were diagnosed with polio earlier this year. Both are likely paralyzed for life, health officials said.

Muhammad Ali Pate is from northern Nigeria and is now with the Duke University Global Health Institute.

He said, "The Chigari Foundation, with the support of the Bill and Melinda Gates Foundation, is continuing to work on community engagement, through the northern traditional leaders, on primary health care and polio eradication. And that will continue."

Northern Nigeria is where Boko Haram militants operate. They have made vaccination campaigns difficult.

Nigerian Ministry of Health official Olajide Osundu told VOA that his agency is working with the Nigerian military to reduce risks.

"They (military troops) will be part of the team that will go around to guarantee safety of the health workers," he said.

Polio is not the only health threat in Borno State. Nearly one in four children there suffers from life-threatening malnourishment.

Doctors Without Borders has worked in northeast Nigeria since 2014 to help fight malnutrition and diseases such as cholera and measles.

In related news, officials in Afghanistan are restarting polio vaccinations. The vaccines are being offered to thousands of children in eastern Afghanistan. Until recently, the area was under the control of Islamic State militants.

The vaccinations were on hold for more than 18 months because health workers were not able to safely travel to three districts in Nangarhar Province, which borders Pakistan.

The Islamic State group has blocked polio vaccinations and gave out misinformation linking the vaccines to fertility problems for both boys and girls. They also said that the vaccines contain pork products, which are not permitted under Islamic law.

Neither statement is true.

Recent military operations by Afghan and U.S. forces are reported to have cleared many areas of Islamic State militants.

Chika Oduah and Carol Pearson reported this story for VOANews. Bruce Alpert adapted the story for Learning English. George Grow was the editor.

diagnose - v. to recognize a disease or illness by examining someone

paralyze - v. to make a person unable to move or feel all or part of the body

engagement - n. the act or state of being involved with something

malnutrition – n. a lack of healthy food in the diet