Update Required To play the media you will need to either update your browser to a recent version or update your Flash plugin.
By Phil Dierking
08 September, 2017


When you ask Americans about European foods, many people talk about their favorite meals from Italy, France, or even Germany. But food and drink from another European country – Portugal -- is growing in popularity, both in the United States and other areas.

In fact, while Portugal may not have as many famous dishes as its European neighbors, Portuguese tastes have influenced food and restaurants from Europe, to Asia, Africa and the Americas.

Many areas have been touched by Portuguese tastes in some way. With Portugal's long colonial history and immigrant population around the world, Portuguese cooking is finding an important place in many homes.

The story of Portugal's influence on food is tied to its centuries as a colonial power. Portugal was one of the first European countries to start exploring the world. At one time, Portugal controlled territory on almost every continent. Along their travels, Portuguese explorers, sailors, businessmen and clergy left their mark on the cultures and food they encountered.

A Portuguese tradition of food

To understand the effect Portuguese cooking has had, it is important to describe some of the food itself.

There are many different Portuguese foods. However, Portugal is perhaps most famous for its fish. With a coastline nearly 1,800 kilometers long, fish and seafood are not hard to find. Portugal actually has the fourth highest fish consumption per person of any country in the world.

The most common kind of fish in Portuguese cooking is cod. Portuguese crews have been fishing for cod since the 15th century. Because this tradition started long before the invention of refrigeration equipment, the cod is almost always dried and salted. Most fish in Portugal is then served either dried, as is, boiled in water, or roasted over a fire. 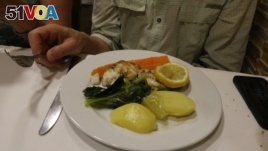 A Portuguese meal of cod fish and potatoes. Cod is one of the most commonly eaten fish in Portugal.

Sardines are another popular fish. Other Portuguese dishes use seafood like octopus, squid, crabs, and shrimp.

In the past, many of Portugal's pastries were made by Catholic religious workers. The main ingredient for any pastry is egg yolks. One of the most famous tasty treats is called Pastéis de Nata. They are small, rich creamy tarts. These baked goods can be found all over Portugal, and also in many of Portugal's former colonies, like Brazil.

Portugal is famous all over the world for its alcoholic drinks. Perhaps the most famous wine is a sweet, dark-red Port, made from grapes in northern Portugal.

Another important wine is Madeira. Madeira was probably the most popular wine in North America from the time the first Europeans arrived, until the middle of the 1800s. It comes from the islands of Madeira, a popular stopping point for European ships on their way across the Atlantic Ocean.

During the American Revolution against British rule, Britain restricted foreign imports to its American colonies. Yet the British did permit imports from the islands of Madeira. General George Washington was known to drink Madeira wine. He is reported to have celebrated with drinks after the signing of the Declaration of Independence and his swearing-in as the first president of the United States.

Pork, beef, and chicken are also all popular in the Portuguese diet. They are often cooked on a grill. The meat is often seasoned with spices that the Portuguese collected from their travels around the world.

A popular dish that many Portuguese have at the beginning of a meal is a soup called Caldo Verde. This is made from potato purée, sliced kale, and cuts of sausage.

While Portuguese food is important by itself, what is most interesting is how it influenced food in other countries.

One example can be found on the other side of the world -- in Japan. The Portuguese started trading with Japan in 1543. The two sides continued trading for almost a century. During that time, a Portuguese fried green bean specialty, called peixinhos da horta, was passed on to the Japanese.

Today in Japan, that kind of cooking is called tempura. It is used with green beans, shrimp, and other foods.

The Portuguese also left an influence on Goa, in western India, which they controlled from 1510 until 1961. The Portuguese in Goa cooked a dish using pork and a topping made from wine and garlic. This dish later become popular with many Indians. Now called vindaloo, it remains popular in the country today.

Portuguese food has not been as well known in the United States until recently. That began changing with the rise of the popular fast-food restaurant Nando's Peri-Peri. The eatery's main offering is chicken served with a spicy seasoning that comes from Mozambique, a former Portuguese colony.

The very first Nando's Peri-Peri opened in South Africa, but the restaurant chain now has eateries all over Africa, Australia, and North America. The chain also sells the spicy peri-peri sauce, which has become famous.

Portugal is no longer known just for its cooking, but also for its many foods. It is important to recognize that many of the things you eat today could have already been influenced by the Portuguese many years ago.

Does your country have food that has been influenced by Portuguese cooking? We want to hear from you. Write to us in the Comments Section or on 51VOA.COM.

cuisine - n. a style of cooking

colonial - adj. of or relating to a colony

empire - n. a group of countries or regions that are controlled by one ruler or one government

pastry - n. a small, baked food made from pastry

purée - n. a thick liquid made by crushing usually cooked food, such as fruits or vegetables)

roast - v. to cook (food such as chicken, potatoes, or beef) with dry heat in an oven or over a fire