Update Required To play the media you will need to either update your browser to a recent version or update your Flash plugin.
By Ashley Thompson
08 September, 2017


One of the most powerful earthquakes ever to hit Mexico shook the southern part of the country Thursday night.

The 8.2-magnitude earthquake was stronger than the 1985 quake that killed thousands and destroyed large parts of Mexico City.

Hundreds of buildings collapsed or were damaged. Smaller quakes have followed. Officials closed schools Friday in at least 11 states to check them for safety.

The U.S. Geological Survey said the quake was centered in the Pacific Ocean off the coast of Chiapas state. It was near the point of collision between three tectonic plates, the Cocos, the Caribbean and the North American. 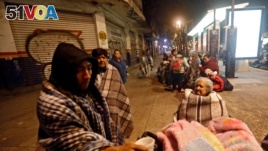 People gather on a street after an earthquake hit Mexico City, Mexico, Sept. 8, 2017.

Rodrigo Soberanes, who lives near San Cristobal de las Casas in Chiapas, told the Associated Press that his "house moved like chewing gum."

The quake caused buildings to move violently in Mexico's capital more than 1,000 kilometers away.

In neighboring Guatemala, President Jimmy Morales spoke on national television to call for calm while emergency crews checked for damage.

"We have reports of some damage and the death of one person, even though we still don't have details," Morales said.

magnitude - n. a number that shows the power of an earthquake

chewing gum - n. a type of soft candy that you chew on but do not swallow

collision - n. a crash in which two or more things or people hit each other