Update Required To play the media you will need to either update your browser to a recent version or update your Flash plugin.
By Edgar Allan Poe
07 May, 2015


Our story today is called "The Purloined Letter." It was written by Edgar Allan Poe. Poe is generally known for his horror stories. This is the third of three stories he wrote about Auguste Dupin and how he solves crimes. The story is about a stolen letter. It first appeared in 1844 in a yearly magazine. It was reprinted in many publications, newspapers and books. This is one of Poe's stories that influenced the development of the modern detective story.

One evening in Paris, during the autumn of eighteen forty-five, I went to visit a friend, Auguste Dupin. We were smoking our pipes and talking when the door of his apartment opened. Mr. Germont, the head of the Paris police force, came into the room.

"I came to ask your advice," Germont said to my friend Dupin. "I am trying to solve a very important case. It is also a very simple case, so I really need your help. But I thought you would like to hear about it, because it is so strange.

"My men and I have worked on this case for three months," Germont said. "It is a very simple case of robbery. But we still cannot solve it."

Dupin took the pipe out of his mouth. "Perhaps the mystery is too simple," he said. 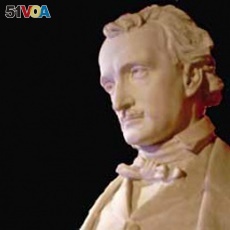 Edmund Quinn's sculpture of Edgar Allan Poe is on display at The Poe Museum in Richmond, Virginia.

Germont began to laugh. "Too simple?" he said. "Who ever heard of such a thing?"

I looked at Germont. "Why don't you tell us the problem?" I said.

Germont stopped laughing and sat down.

"All right," he said. "But you must never tell anyone I told you this."

"The wife of a very important person needs help. I cannot tell you her name, because her husband is a powerful man in the French government. Let us just call her Madame X. Three months ago, someone stole a letter from Madame X. She is offering a large amount of money to anyone who can return the letter to her.

"We know that her husband's political enemy, Mr. D'Arcy, stole the letter. We also know it is somewhere in his apartment. D'Arcy plans to use the letter to embarrass Madame X's husband and destroy his political power.

"As you know, I have keys which can open any lock in Paris. For the last three months, my men and I have spent every evening looking for the letter in his apartment. But we cannot find it."

Dupin stopped smoking. "Tell me how you looked for it," he said. Germont moved forward in his chair.

"We took our time," he said. "First, we examined the furniture in every room. We opened all the drawers. We looked under the rugs. We searched behind all the paintings on the walls.

"We opened every book. We removed the boards of the floor. We even took the tops off the tables to see if he had hidden the letter in the table legs. But we cannot find it. What do you advise me to do?"

Dupin puffed on his pipe. "What does the letter look like?" he asked.

"It is in a white envelope with a red stamp," Germont said. "The address is written in large black letters."

Dupin puffed on his pipe again. "I advise you to go back and search the apartment again," he said.

About one month later, Germont came back to see us.

"I followed your advice," he said. "But I still have not found the letter."

Dupin smiled. "I knew you would not find it," he said. Germont became very red in the face. "Then why did you make me search the apartment again?" he shouted.

"My dear Germont," Dupin said. "Let me tell you a little story. Do you remember the famous doctor, Louis Abernathy?"

"Of course! Of course," Dupin said. "Once, a rich old man met Abernathy at a party. The old man was not feeling very well. He decided he would get a medical opinion from the doctor without paying for it. So he described his problems to Abernathy. 'Now doctor,' the old man said, 'suppose you had a patient like that. What would you tell him to take?'"

"'Oh, that is quite simple,' said Abernathy. 'I would tell him to take my advice.'"

Dupin smiled at Germont. "How much money did you say the reward was?" he asked. Germont sighed. "I do not want to tell you the exact amount. But I would give fifty thousand francs to the person who helps me find that letter."

"In that case," Dupin said, "take out your checkbook and write me a check for fifty thousand francs. When you have signed the check, I will give you the letter."

Germont looked at Dupin with his mouth open. His eyes seemed to jump out of his head. Then he took out his checkbook and pen, and wrote a check for fifty thousand francs. He gave it to Dupin.

My friend examined the check carefully and put it in his pocket. Then he unlocked a drawer of his desk, took out the letter, and gave it to Germont.

The policeman's hands shook as he opened the letter. He read it quickly. Then he put it in his pocket and ran out of the room without saying a word.

"Dupin!" I said, as I turned to my friend. "How did you solve the mystery?"

"It was simple, my friend," he said. "Germont and his policemen could not find the letter, because they did not try to understand the mind of the man who stole it. Instead, they looked for the letter where they would have hidden it.

"Mr. D'Arcy is not a policeman. He is, however, very intelligent. He knew the police would search his apartment. He also knew how police think. So, he did not hide the letter where he knew they would look for it.

"Do you remember how Germont laughed when I said the mystery was difficult for him to solve because it was so simple?"

Dupin filled his pipe with tobacco and lit it. "Well, the more I thought about it, the more I realized the police could not find the letter because D'Arcy had not hidden it at all.

"So I went to visit D'Arcy in his apartment. I took a pair of dark green eyeglasses with me. I explained to him that I was having trouble with my eyes and needed to wear the dark glasses at all times. He believed me. The glasses permitted me to look around the apartment while I seemed only to be talking to him.

"I paid special attention to a large desk where there were a lot of papers and books. However, I saw nothing suspicious there. After a few minutes, however, I noticed a small shelf over the fireplace. A few postcards and a letter were lying on the shelf. The letter looked very old and dirty.

"As soon as I saw this letter, I decided it must be the one I was looking for. It must be, even though it was completely different from the one Germont had described.

"This letter had a large green stamp on it. The address was written in small letters in blue ink. I memorized every detail of the letter while I talked to D'Arcy. Then when he was not looking, I dropped one of my gloves on the floor under my chair.

"The next morning, I stopped at his apartment to look for my glove. While we were talking, we heard people shouting in the street. D'Arcy went to the window and looked out. Quickly, I stepped to the shelf and put the letter in my pocket. Then I replaced it with a letter that looked exactly like it, which I had taken with me. I had made it the night before.

"The trouble in the street was caused by a man who had almost been run over by a horse and carriage. He was not hurt. And soon the crowd of people went away. When it was over, D'Arcy came away from the window. I said good-bye and left.

"The man who almost had an accident was one of my servants. I had paid him to create the incident."

Dupin stopped talking to light his pipe. I did not understand. "But, Dupin," I said, "why did you go to the trouble of replacing the letter? Why not just take it and leave?"

Dupin smiled. "D'Arcy is a dangerous man," he said. "And he has many loyal servants. If I had taken the letter, I might never have left his apartment alive."

The Purloined Letter was written by Edgar Allan Poe and adapted by Dona De Sanctis. The storyteller was Shep O'Neal. The producer was Lawan Davis.

case - n. a situation that is being investigated or managed by someone (such as a police officer or social worker) in an official way

robbery - n. the crime of stealing money or property?

embarrass - v. to make someone feel confused, foolish or ashamed in front of other people

puff - v. to breathe smoke from a cigarette, pipe, etc., in and out of the lungs?

sigh - v. to take in and let out a long, loud breath in a way that shows you are bored, disappointed, relieved, etc.?

check - n. a piece of paper that is used to make a payment to someone using the money in a bank account

checkbook - n. a book containing checks for use with a checking account

franc - n. a basic unit of money that is used in some countries where French is spoken

Now it's your turn. Do you like to read detective stories? Who is the best detective story writer in your language? Write to us in the comments section.