Update Required To play the media you will need to either update your browser to a recent version or update your Flash plugin.
By Willa Cather
26 March, 2015


Our story today is called "Paul's Case." Willa Cather wrote it. Donna de Sanctis? adapted it for VOA Learning English. "Paul's Case" will be told in two parts. Here is Kay Gallant with part one of the story.

He was tall for his age and very thin. His clothes were too small for him, but they were clean. He had a bright red flower in the button hole of his black jacket. One of the teachers asked Paul why he had come to the meeting. Paul said politely that he wanted to do better in school. This was a lie. Paul often lied.

His teachers began to speak. They had many complaints. One said Paul talked to the other students instead of paying attention to the lessons. Another said Paul always sat in class with his hands covering his eyes. A third teacher said Paul looked out the window instead of looking at her. His teachers attacked him without mercy.

Paul's eyebrows moved up and down as his teachers spoke. His smile never left his face, but his fingers shook as he touched the flower on his coat. At last the meeting was over. Paul's smile got even wider. He bowed gracefully and left the room.

His teachers were angry and confused. The art teacher spoke for all of them when he said there was something about Paul that he didn't understand. "I don't think he really means to be bad," he said. "There's just something wrong with that boy." Then the art teacher remembered one warm afternoon when Paul had fallen asleep in his class. Paul's face was white with thin blue veins under the skin. The boy's face looked tired and lined, like an old man's. His eyebrows moved up and down, even in his sleep.

After he left the meeting, Paul ran down the hill from the school whistling. He was late for his job at the concert hall. Paul was an usher there. He showed people to their seats. He carried messages for them. He brought them their programs with a polite bow. Everyone thought he was a charming boy and the best usher at the hall.

When Paul reached the concert hall that evening, he went immediately to the dressing room. About six boys were already there. Paul began changing his clothes with excited hands. He loved his green uniform with the gold pockets and design. 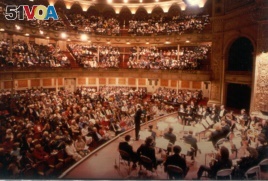 Paul rushed into the concert hall as soon as he had changed clothes. He ran up and down the hall, helping people. He became more and more excited. His face became pink and his eyes seemed larger and very bright. He looked almost handsome. At last everyone was seated. The orchestra began to play and Paul sat down with a sigh of relief.

The music seemed to free something in Paul's spirit. Then a woman came out and began to sing. She had a rich, strong soprano voice. Paul felt truly happy for the first time that day.

At the end of the concert Paul went back to the dressing room. After he had changed his clothes again he went outside the concert hall. He decided to wait for the singer to come out. While he waited he looked across the street to the large hotel called "The Schenley." All the important people stayed at The Schenley when they visited Pittsburgh. Paul had never been inside it, but he used to stand near the hotel's wide glass doors. He liked to watch the people enter and leave. He believed if he could only enter this kind of a hotel, he would be able to leave school, his teachers, and his ordinary, gray life behind him. . . forever.

At last the singer came out of the concert hall. Paul followed her as she walked to the hotel. He was part of a large crowd of admirers who had waited to see her. When they all reached the hotel, she turned and waved. Then the doors opened and she disappeared inside. Paul stared into the hotel as the doors slowly closed. He could feel the warm, sweet air inside. And for a moment, he felt part of a golden world of sparkling lights and marble floors. He thought about the mysterious dishes of food being served in the hotel's dining room. He thought about green bottles of wine growing cold in silver buckets of ice.

He turned away from the hotel and walked home. He thought of his room with its horrible yellow wallpaper, the old bed with its ugly red cover. He shook his head.

Soon he was walking down the street where he lived. All the houses on Cordelia Street were exactly alike. Middle class businessmen had bought them for their families. All their children went to school and to church. They loved arithmetic. As Paul walked toward his house he felt as if he were drowning in ugliness. He longed for cool colors and soft lights and fresh flowers. He didn't want to see his ugly bedroom or the cold bathroom with its cracked mirror and gray floor.

Paul went around to the back of his father's house. He found an open window and climbed into the kitchen. Then he went downstairs to the basement. He was afraid of rats. But he did not want to face his own bedroom. Paul couldn't sleep. He sat on the floor and stared into the darkness until morning came.

The following Sunday Paul had to go to church with his family. Afterwards, everyone came home and ate a big dinner. Then all the people who lived on Cordelia Street came outside to visit each other.

After supper Paul asked his father if he could visit a friend to get some help with his arithmetic. Paul left the house with his school books under his arm. But he didn't go to his friend's house. Instead he went to see Charley Edwards. Charley was a young actor. Paul liked to spend as much time as he could at the theater where Charley Edwards and his group acted in their plays.

It was only at the theater and the concert hall that Paul felt really alive. The moment he smelled the air of these places he felt like a prisoner suddenly set free. As soon as he heard the concert hall orchestra play he forgot all the ugly, unpleasant events in his own life.

Paul had discovered that any kind of music awakened his imagination.

Paul found a schoolroom even worse after a night at the theater or the concert hall. He hated the school's bare floors and cracked walls. He turned away from his dull teachers in their plain clothes. He tried to show them how little he thought of them and the studies they taught.

He would bring photographs of all the actors he knew to school. He would tell the other students that he spent his evenings with these people at elegant restaurants. Then he would announce that he was going away to Europe or to California, or to Egypt for a while. The next day he would come to school smiling nervously. His sister was ill, he would say. But he was still planning to make his trip next spring.

Finally, his teachers went to Paul's father. He took Paul out of school and made him get a job. He told the manager at the concert hall that Paul could not work there anymore. His father warned the doorman at the theater not to let Paul into the place. And Charley Edwards promised Paul's father not to see Paul again.

All the actors at the theater laughed when they heard about the stories Paul had been telling. The women thought it was funny that Paul had told people he took them out to nice restaurants and sent them flowers. They agreed with the teachers and with his father that Paul's was a bad case.

You have just heard part one of the American story "Paul's Case." Willa Cather wrote it. Donna de Sanctis? adapted it for VOA Learning English. Your storyteller was Kay Gallant.

Pittsburgh - (Placename) a port in SW Pennsylvania; the largest river port in the US and an important industrial centre, formerly with large steel mills.

vein - n. any one of the tubes that carry blood from parts of the body back to the heart

eyebrows - n. the line of hair that grows over your eye

usher - n. a person who leads people to their seats in a theater, at a wedding, etc.

uniform - n. a special kind of clothing that all the members of a group or organization wear

marble - n. a kind of stone that is often polished and used in buildings and statues?

wallpaper -n. thick decorative paper used to cover the walls of a room?

soprano - adj. relating to the highest female singing voice or the highest voice part in a singing group?

Now it's your turn. What do you think of Paul? Is there something wrong with him? Write to us in the comments section.